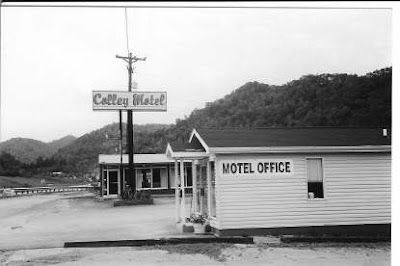 What is it about Kentucky that seems to foster crew after crew of dangerous teenage Goth-loser-wannabe occultists? In 1998 the activities of yet another gang of self-styled spawns of Satan made national headlines, as 19-year-old Natasha Cornett and her Pikeville posse pleaded guilty to a triple homicide.

In April 1997, Vidar and Delfina Lillelid, along with their 6-year-old daughter Tabitha, were driving home from a Jehovah's Witnesses event when they stopped at a highway rest area. It was here that they were accosted by Cornett and her Korn-listening kooks. The entire family was later found, shot to death, in a ditch along a dark rural gravel road a few miles away.

In police custody, Cornett declared herself to be "the daughter of Satan", and confessed to a blood-letting satanic ritual at the Colley Motel in Pikeville. Self-mutilation was a key part of the sect's activities, and when arrested, Cornett had around 20 cuts on her right arm and around 50 on her left. The group believed that communication with Satan was only possible during these self-cutting rituals.

Cornett also confessed that it had been the group's intent to carry out a cross-country murder spree, and specifically named the film "Natural Born Killers" as an influence.

A documentary about the kids, entitled Six, is available on DVD. The film raises a number of disturbing points, such as the fact that Cornett had previously been committed to the Charter Ridge mental hospital in Lexington and diagnosed as bipolar and dangerous, yet was released because she had no insurance.
Posted by JSH at 3:57 PM

What's so disturbing about not getting treatment because you have no insurance? Hospitals aren't charitable institutions ya know. What's disturbing is working for someone who is bipolar...and I spend most of the night 3 feet away from the man. Help me.

You wanted to know what it was about Kentucky and cults...it's the secret ingredient of poverty.

The secret ingredient is poverty, your right, but part of poverty is not having insurance. Hospitals are not charitable institutions but what your saying is some people simply don't have enough money to live. I know people who have had your view until their insurance companies didn't cover their rare illness or "pre-existing conditions." I truly hope you personally will never have to realize that the hard way. Maybe if Cornett's mental illness was properly addressed she would have had a chance, and a beautiful innocent family would still be alive. There is no justification for murder but we must learn why. It was a perfect sh*tstorm, and it could have been avoided.