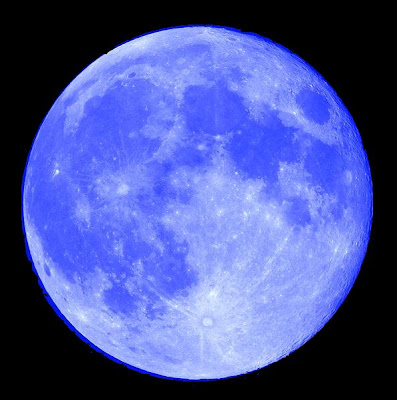 1. Elvis Presley, in private moments filtered through his own internal gobo of pills and vodka, often stated that he felt as if he was not of this world.

3. According to some ancient myths, a blue moon is a rarely occurring magical event during which the moon's cratered face speaks.

4. The term "blue moon" is most commonly used metaphorically to describe a rare event, as in the saying "once in a blue moon".

5. According to Wikipedia: "Most years have twelve full moons which occur approximately monthly, but each calendar year contains those twelve full lunar cycles plus about eleven days to spare. The extra days accumulate, so that every two or three years there is an extra full moon (this happens every 2.72 years). Different definitions place the extra moon at different times - the extra moon is called a blue moon".

6. Many people call a full moon a blue moon if it was the second of two full moons to occur in the same calendar month. However, this definition of "blue moon" originated from a mistake in an article in the March 1946 Sky & Telescope magazine. This mistake has perpetuated and taken on a life of its own since 1946.

7. Elvis Presley had an unusual propensity for recording "blue" songs, and three of them specifically were blue moon songs: "Blue Moon", "Blue Moon of Kentucky", and "When My Blue Moon Turns To Gold Again".

8. "When My Blue Moon Turns To Gold Again" was written in 1941 by Kentuckians Wiley Walker and Gene Sullivan.

9. The band R.E.M. featured a blue moon on the cover of their "In Time" compilation CD.

10. One of R.E.M.'s biggest hits was "Man on the Moon", which seems to express doubt that mankind actually went to the moon, and also mentions Elvis.

11. In an early interview, Michael Stipe said that R.E.M. actually stood for Ralph Eugene Meatyard, a Kentuckian best known for his epic photographic work The Family Album of Lucybelle Crater.

12. The blue people of Kentucky were originally believed by some to be aliens, or angels, from another world.

13. The matriarch of the best-known Kentucky blue-people clan was named Luna.
Posted by JSH at 10:20 PM