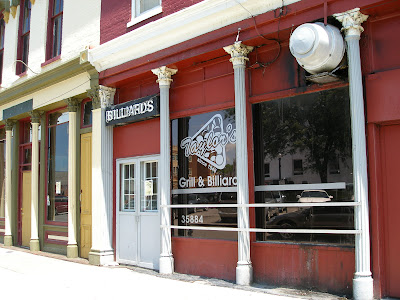 The last great old-school pool hall in Madison County is gone. I just happened to be in Richmond recently and decided to get a couple of "Jasonburgers" (so nicknamed by fans of the owner and cook) and found it closed down and empty inside. How could such a thing happen?

Then I realized that ALL the shops on the whole First Street block were shut down. One's even in the process of being torn down. Since First Street was one of the last interesting and useful blocks in Richmond that still had any character or integrity, doesn't it just figure that someone would of course want to get rid of it? I've gone to see many a band on that block over the years, from the silly (A Styx cover band) to the sublime (Southern Culture On The Skids), and I've even BEEN that band several times, with my old musical combos like The Kentuckians, Cheeseburger & Fries, and Formula LX-321.

Most importantly, historically speaking, the great Kentucky author Walter Tevis used to do much of his drinkin', smokin', and pool sharkin' here back in the day, and for that reason alone, this place should have been named a protected historic site.

The mysterious motorcyclist-savant "Buckhorn" (see page 110 in the Weird Kentucky book) also dwelled here daily, hawking wristwatches, fountain pens, pocket knives, zippo lighters, antique silver cigarette cases, and other doodads from the virtual general store that was the inside of his denim coat.

You'd walk through the filthy screen door to find an ancient green countertop, with discolored places worn from decades of elbows. You'd find a seat on an ancient stool held together with duct tape, and you'd be likely to have a tobacco farmer sitting beside you on your left and an attorney on your right.

The mighty Jason would open the fridge, pluck balls of raw burger that had been prepared in the early morning hours, and spatula them flat on an ancient grill that was caked in the carbon-black grease of a century, much like the one Kerouac described in Visions of Cody. Then he'd reach into a huge bucket filled with freshly hand-cut french fries immersed in icewater, and drop them onto the grill as well. A dozen oddball characters shouting orders at him (and calls for "another beer over here!") and Jason always managed to keep his cool and never screw up a single order. I heard rumors that he's a master golfer when not in his cook's apron, and this cool probably serves him well.

If you ordered a beer, it came from a glass-doored cooler unit right in front of you. If you ordered a soft drink, Jason or one of his minions would get fifty cents out of the cash register, walk all the way down to the pool-table area to a Coke machine there, purchase your drink from it, and come back to the counter to bring you the can. I always thought that was a peculiar and wonderfully Southern way of doing it.

People smoked at Taylor's. Hard to imagine in this confused and sterile modern world, but they gleefully smoked like chimneys at good ol' Taylor's - cigs, cigars, pipes, not to mention dip, snuff and chaw. They drank and they smoked and listened to George Jones and smoked some more, then they ate meat and consorted with whores and then drank some more. Some even occasionally played pool.

There were photographs of the place's early history on the wall, along with an old sun-bleached and nicotine-stained nude photo of some woman with a 1960s hairdo. There was still an antiquated cigarette machine, even though political correctness had eliminated them from most other places in America. There was a 1920s-looking wood-and-glass showcase filled with sad-looking store-bought snack cakes that nobody ever ate. There was a giant greasy old handpainted menu overhead whose prices were no longer correct but they left it up for show. There was also a greasy sign above the grill that said "We serve the best burgers in the Universe".

And with that, I'd have to agree. I will miss Taylor's. Goddamnit. 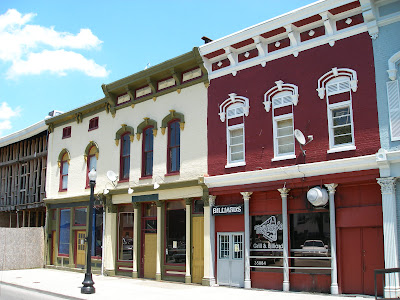 There appears to be an identical paper flyer on each door or window of each building in the above photo ... any idea or recollection of what the flyer says?

Did the Richmond Smoking Ban of 2007 kill all of the businesses on First street? Would Taylor's have been classified as a "bar" in order to get around the ban?

Was just a poster for some local event that some zealous leafleteer put on every door... wasn't an eviction notice or a demolition order or anything like that.

Dunno about the smoking ban, but it probably didn't help matters. I have heard that the whole block was/is owned by the same people who own the Glyndon Hotel, and past that I should probably speculate no more.

They did own it years ago JSH, and your right, probably best not to speculate any further.. haha

I used to go watch "Jason" play Senior League baseball. I also know where a photo is of the last cheeseburger and fries ever served at Taylors. Let me know if you want to see any of this,,,I'll hook you up.