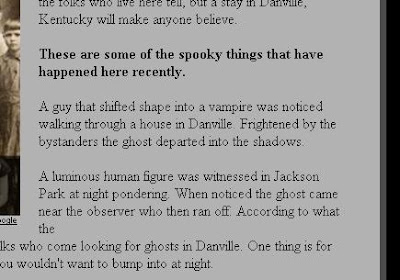 I'm not real big on mere "ghost stories" for a number of reasons, not the least of which is that seemingly everyone has one, and they're usually lacking any useful information.

Too many books about ghosts are simply dry retelling of someone else's hearsay that does serious paranormal investigators little or no good. You know the type - "my Aunt's hairdresser's friend heard a spooky noise in the barn when she was a little girl", etc. This doesn't really serve much purpose, and that's why I tried to keep such junk to a minimum in my Weird Kentucky book.

Compounding the problem are the plethora of internet sites that unquestioningly pass along any sketchy one-sentence rumor of a haunting, just for the sake of having content. One site, Ghosts of America, is particularly offensive to me, because its entries are clearly not only fake, they're randomly computer generated! Examples from their bogus Danville hauntings page, for example, read totally like Mad Libs-style fill-in-the-blank generic ghost story templates, and most don't even make any logical sense:

A lady with her arms severed can often be seen at a coin operated phone in Danville making a phone call.

The phantom of a guy grasping a blood-splattered sword may be seen over and over again examining the surroundings from the highest spot of Berger Knob around midnight.

An armed forces uniform pacing about lacking a body in it has now and then been spotted wandering through a Danville vicinity graveyard. A lot of residents claim this ghost may be the soul of a resident who passed on here in Danville many years ago. In any event, this is a hostile ghost that you shouldn't go looking for.

The ghost of a badly burned female is every now and then made out devastating a shoe beside a deserted highway in the vicinity of Danville before dawn.

The ghost of a train driver has been perceived on many instances in Fort Boonesborough State Park right by the ranger station trying to locate a bag.

A woman lacking a head can sometimes be observed being in an uninhabited structure in Danville. No matter what, it's a creepy ghost that should be stayed away from.

We here at Unusual Kentucky refuse to succumb to mere campfire storytelling without providing at least hard facts like when and where so you folks at home can go inspect the scene for yourselves. The internet's signal-to-noise ratio is increasingly unfavorable, and may soon render it worthless (not just for paranormal research but for all things.)
Posted by JSH at 12:17 AM

"The ghost of a mailman may be witnessed time and again floating in the air like a blimp in Berea."