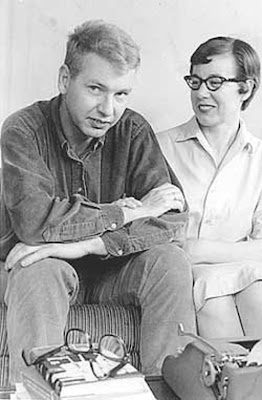 Walter Tevis was a good ol' Madison County boy who served in World War II at a young age, attended Model High School (now Model Laboratory School) in Richmond, and went on to college at the University of Kentucky. His two biggest passions were playing pool and writing, and he somehow managed to juggle the two well enough to earn his Masters degree. Tevis spent a great deal of time in the smoky, dirty pool rooms of Richmond, even after becoming a schoolteacher in small towns like Science Hill, Irvine, and Carlisle. Later, he went on to become a professor at UK, and then Ohio University. His pool shark's life of drinking and smoking caught up with him in the end, however, and in his final years he battled alcoholism and lung cancer. He died in New York in 1984.

Oh, and he also just happened to be the author of three blockbuster novels: The Hustler, The Color of Money, and the Science Fiction classic The Man Who Fell to Earth, all three of which were also made into equally blockbuster Hollywood films.

The nationwide pool craze created by Tevis with his book The Hustler and the subsequent movie version single-handedly revolutionized the billiards industry, making it what it is today and giving it enormous new popularity and respectability.

For what it's worth, Tevis also inadvertently gave the world "Minnesota Fats", AKA Rudolph Wanderone Jr., the world famous pool player who achieved fame by appropriating the name of a character in The Hustler and claiming that Tevis (whom he had never met) had based the book on him! Tevis denied this and called Wanderone a fraud, stating, "I made up Minnesota Fats just as Walt Disney made up Donald Duck."

Tevis is buried in the Richmond Cemetery in Madison County, not far from where the last of the great old Richmond pool halls - Taylor's Billiards - still existed up until just last month.
Posted by JSH at 12:03 AM