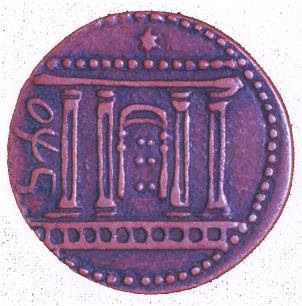 In 1952, a man in Clay City found a strange coin in his hog pen, in part of a field alongside Route 15 - a field that had just recently been plowed for the very first time. The coin was later determined to be from the Bar Kokhba rebellion, in which Simon Bar Kokhba led the Jews to split away from Roman Empire and form a short-lived sovereign state, which was re-conquered by the Romans in the year 135. His name is Aramaic for "Son of a Star" and was intended as a reference to Numbers 24:17, "there shall step forth a star out of Jacob."

The mysterious coin was the subject of an article by Joe Creason in the Louisville Courier-Journal on July 12, 1953. However, in later years, several experts (including the curator of numismatics at the Israel Museum in Jerusalem) determined that the coin was a fake - but a real fake..... the replica was indeed old in itself, and it has been postulated that it was made for tourists in the very early 20th century as a souvenir of the Holy Land.

But how did it up buried in a field in the middle of nowhere in an extremely remote part of Kentucky? Good question.

And yet, other Bar Kokhba coins have been found in our state, inexplicably. An article in the February 1980 issue of the journal Current Anthropology devotes extensive attention to the subject. Professor J. Huston McCulloch of Ohio State University has also been researching the Kentucky Bar Kokhba phenomenon for some time, and is aware of another Bar Kokhba coin that was dug up in Louisville in 1932, and yet another one found in Hopkinsville in 1967. Still others have turned up in other southern states.

Prof. McCulloch, incidentally, is also a leading authority on two anomalous artifacts known as the Bat Creek Stone (discovered in 1889 inside an undisturbed burial mound in Eastern Tennessee) and the Grave Creek Stone (found in 1838 inside an Adena burial mound in Moundsville, West Virginia). Both of these amazing stone tablets contain writing - possibly Iberian runes on the latter and definitely Hebrew on the former. Though found not in Kentucky but in bordering states, they most certainly are part of the same confusing labyrinth of enigmas surrounding the mound-building civilizations that once inhabited this general region before state lines were drawn.
Posted by JSH at 11:56 PM