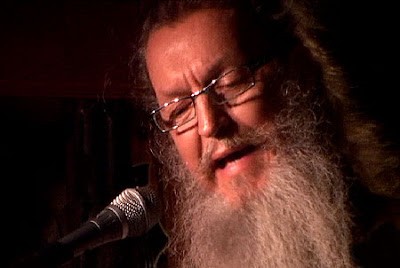 Ron Whitehead is a gloriously cantankerous and curmudgeonly writer/poet from the old old school, cut from the same cloth as Ambrose Bierce and Jonathan Swift, as well as his Beat-era heroes like Allen Ginsberg and Gregory Corso. For years Ron has been toiling away at his numerous books of poetry and prose, and making countless appearances at readings and other events with his band Southside.

What I admire about Ron is not so much his literary skills, formidable though they are; what I get off on most is the man's moxie and stubbornness at self-promotion, and determination. He even had the chutzpah to approach the Dalai Lama and to cajole him into writing a poem together with him.

To really get the full flavor of Ron's peculiar brand of Kentucky-centric rants, however, you have to hear him read his works, preferably in person. Delivered in a style, pitch, and meter that's somewhere between Steve Railsback's portrayal of Charles Manson and Dennis Hopper's character in Apocalypse Now.

Whitehead lives in the splendor of the Louisville Highlands, in the Cherokee Park area, and welcomes visitors to his home that is literally a museum about himself - he calls it the "Bone Man Museum" and charges one bottle of red wine admission. (Among the artifacts on display: a portrait of himself and his (now ex) wife Sarah, which he commissioned me to paint for him in 2005. See below.)

I had Ron for a English 101 teacher when I was going to school at JCC...He was a self promoter indeed...I thought it was great...Making his students buy his book and write a report on it was ingenious.