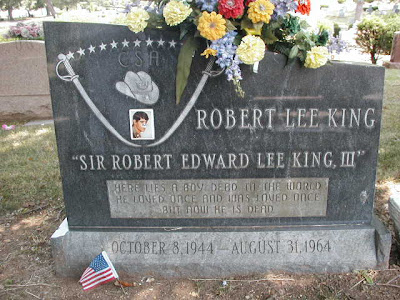 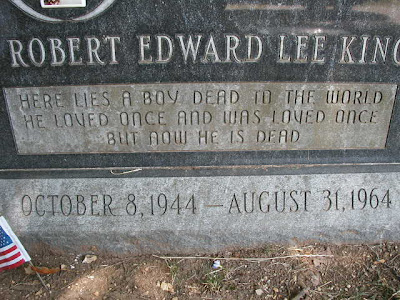 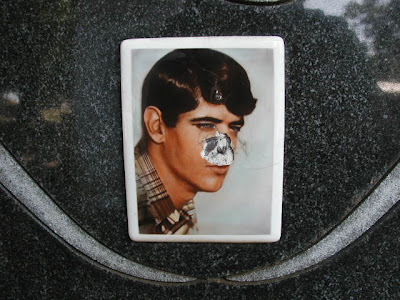 Almost walking distance from Bondurant's Pharmacy lies another mysterious piece of puzzling evidence about the human condition - or at least it did at one time.

In 2003 (when these photographs were taken), I was wandering around in the Hillcrest Memorial Park cemetery at 2089 Versailles Road in Lexington. I was looking for interesting gravestones and this one caught my eye with the royal name.

But upon closer inspection, I realized that someone had defaced King's photo on the grave, gouging out part of his face. It took a few moments to realize that "CSA" meant "Confederate States of America"..... and then I saw the Rebel flags on a second stone bearing his name. 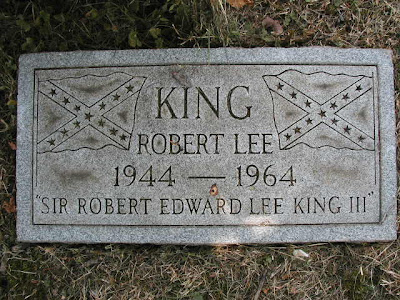 The odd inscription on the main stone baffled me most of all:

Here lies a boy dead to the world

But now he is dead

It was also very surprising to me that the grave desecration hadn't been repaired by anyone. Even removing the photo plate altogether would be better than leaving the defaced one up. From the looks of it, it had been damaged for some time.

But the drama didn't stop there.

Near Sir King's grave, I found the grave of one Leslie D. "Dougie Do-Right" King, 1941-1997. Dougie's stone has an odd inscription similar in style, syntax and theme to Sir Robert E. Lee King's, and makes reference to someone named Jo Ann Kearns. For unknown reasons, someone has tried really, really hard to obliterate Jo Ann Kearns' name. What is up with these people?? 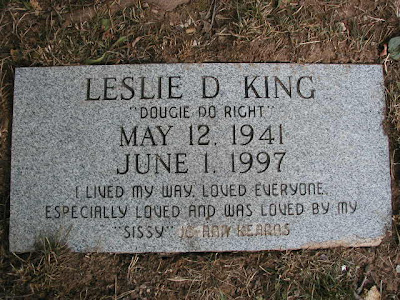 This weekend, driving home from my book-signing event at Morris Book Shop, I drove by Hillcrest Memorial Park and decided to stop and check in on Sir King and Dougie. I thought I knew exactly where they were, but I drove in circles for twenty minutes and couldn't find them even though I'm convinced I was in the right spot. My guess is, someone finally got fed up with the grave desecration, had the bodies exhumed and moved them somewhere safer. If they're still there and I just missed them, drop me a line and let me know.

As with all reports of unusual and interesting graves on this site, we intend to show our respect to these people by featuring them here. Our sometimes waggish tone should not, not, not be construed as not taking grave desecration seriously. We have zero tolerance for cemetery vandalism, and even though Mr.King is a total stranger to us, if we ever found out who damaged his headstone, we might be tempted to hurt them real bad in seven places and smite them with the Curse of Grillo's Grandfather.
Posted by JSH at 9:26 AM

That all gives me the heebie-jeebies. People carry vendettas for far too long.