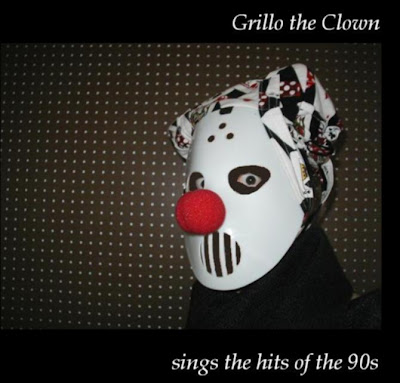 The first reported sightings of this unique Kentucky eccentric were in the early 1990s, on the streets of towns like Winchester, Paris, and Cynthiana. Nowadays, however, Grillo is mainly found around the downtown/UK areas of Lexington, dressed in his usual outlandish regalia and masks. A self-styled performance artist, street musician, and panhandler, Grillo also has his own rent-a-clown business, but we'd be surprised if anyone has ever hired him.

There are many stories about Grillo's past but all are contradictory. Grillo himself tells radically different versions of his life story when asked. Although his only internet access comes from visits to the public library, he maintains a considerable web presence with numerous sites by and about him.

The stories of Grillo's misadventures and malfeasance are legendary and worthy of compilation in a tome of their own. My favorite Grillo story is the time he actually took up residence in the men's room of a University of Kentucky campus building, to the extent of actually bringing in chairs, lamps, books, and a TV set. Apparently this went on for many weeks, with only a few "Do not remove" signs taped to his stuff being sufficient to keep unquestioning janitors - or anyone else - from messing with his belongings. It was then that I knew Grillo really was a true performance artist!

Thinking I could harness his radioactive powers, I hired Grillo to perform his act at my Clowns in Love art exhibition in New York City and paid for his bus fare, but it was not to be: he showed up at the very end of the show in an altered state of consciousness, made a mess of the place with shaving cream pies for a few minutes, and then departed into the night with my 200 bucks and two bottles of vodka.

A couple years back, my indie record label Creeps Records cut a deal to release Grillo's album Grillo Sings the Hits of the 90s (He wanted to call it Blubbering Buttsteaks of Eternal Torment). Despite the painfully low-fidelity nature of the recording we were given, and despite the fact that he's singing these songs acapella, the album is actually selling pretty well, so maybe this is a new career for the clown.

Then again, we also received a report from someone that one cassette recently purchased from Grillo on the street, supposedly of music performance by him, actually turned out to contain the audio portion of a TV broadcast of a 2003 Bengals-Chiefs game.