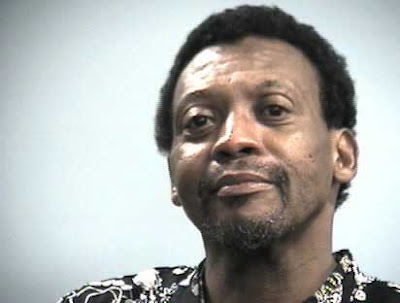 For years I knew this man simply as "James Brown," because that's what he usually prefers to be called. He led a very marginal existence, sometimes homeless, always begging for cash on the streets of Lexington, and often engaging in confrontationally surreal conversations with passersby. For years "James" was a figure alternately feared and beloved by locals for his antics.

Imagine my surprise, then, when he suddenly became world famous, thanks to attention given him on television by late-night talk show host Jimmy Kimmel and a plethora of websites canonizing him for his mile-long arrest record and unorthodox mugshots.

It's a peculiar defensive trait we Kentuckians have: now that every net-geek and frat boy on the planet was yukkin' it up about "that funny homeless guy from Kentucky", most of us suddenly felt a bit offended. "You can't make fun of Henry! He's our crazy street person!"

Though I was initially angry that this man was being held up to worldwide ridicule (mostly without his knowledge) simply for comedy's sake on a TV program, I lightened up when I saw the effect Henry's newfound fame was having: people were suddenly showering him with money, food and gifts, and his sudden popularity with local college students softened any rough edges of his personality. I guess like they say, there's no such thing as bad publicity.

I haven't seen him in a couple years and I don't know what he's up to now, but I'm glad Henry got more than his fifteen minutes of fame. He deserves more, though, and under better circumstances.
Posted by JSH at 11:17 AM

I think I might have seen him in Cowboys in Lexington at some point last year.

By the way, if the same girl is still working as the bartender at Cowboys, I think she's super hot. Sure would love to be able to hook up with that one.

I saw him about 3 weeks ago (Feb. 2010) in a coffee shop. He asked me if I knew him, I said 'yes', and asked me what his name was. Apparently he responds differently if you say 'Henry Earl' or 'James Brown'. I said Henry. He said he doesn't do the James Brown shuffle anymore.