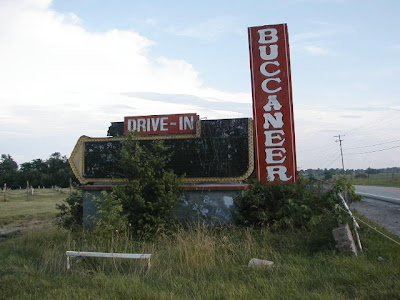 Once this was a proud drive-in theater on U.S. 25 bringing customers from surrounding counties. I saw many first-run films here in the 1960s and 1970s, including The Blob, Westworld, Death Race 2000, Vanishing Point, Bonnie & Clyde, Equinox, When Dinosaurs Ruled The Earth, Frogs, Jaws, etc. 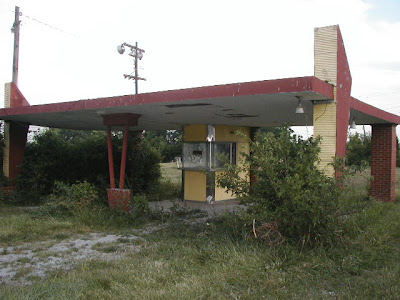 The Buccaneer has been deserted for many years, and was originally on our old site's "Abandoned Places" section. Only a few weeks after we added it to our site, bulldozers appeared and began demolishing the place. Last we saw, the property was being used for storage of timber for some sort of commercial logging company. 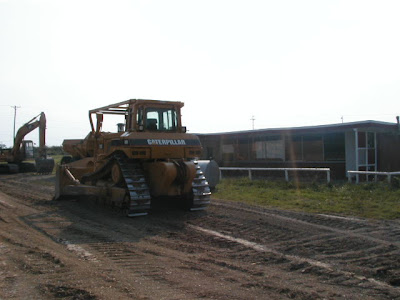 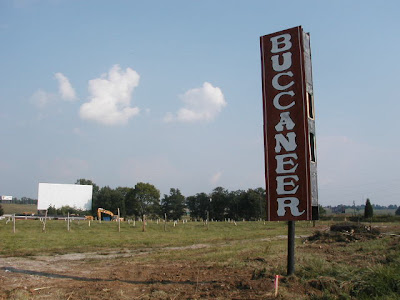 Madison County's other drive-in, Richmond Drive-In, is also gone, having mutated into Krazy Karts, which is itself now also defunct.
Posted by JSH at 8:00 AM

Yup. Still feel something of the "chillin' hands of death," as Jerry Lee Lewis might put it, when I see those demolition pics. Now, growing up in Jackson County, Hill Top was the drive-in at which I grew up viewing movies (actually, the property was adjacent one of my best friend's houses, so I also spent many an afternoon at the drive-in, accomplishing arcane pre-pubescent male tasks such as shooting bows and arrows and who knows what all). The screen was knocked over by severe storm weather in the late eighties (?), and the drive-in was never re-established, and after that the only cinematic option in the region was a forty-five minute drive to Richmond, drive-in or otherwise (and this would have been after the close of the Berea movie theater, but that's another digression on top of digressions). I was a late convert to the Buccaneer. I don't think I was even aware of it until '93 or '94. But after relocating to Lexington in '94, it became a regular deal to hit up the Buccaneer at least a few times every summer. I miss the tradition, and now have to travel to Winchester or Paris, both fine drive-ins, but I'll never have the same warm fuzzy feelings about those locales as I did the Buccaneer (or Hill Top), R.I.P.