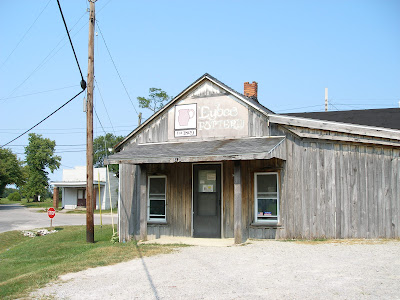 Bybee Pottery is the oldest continuing pottery business west of the Alleghenies, and their primitive and rustic pieces have a considerable following around the world. Even in Japan, there are collectors who know of the work done in this ancient building that looks much as it did when the business began in 1809. Unlike many attractions whose patina is faked for the tourists, this place is the real deal.

Many who have purchased Bybee's creations around the world are shocked to find this global empire is still run from this tiny run-down shack in rural Kentucky.

A number of other Kentucky potteries, spurred on by Bybee's success, also operated in this region for many years. The most famous was Waco Pottery (actually, there were three different Waco Potteries and one was actually connected to Bybee Pottery itself, but that's another story), whose creative glazes and shapes often rivaled those of higher-end companies like Teco or Van Briggle.

Rumors are, Bybee Pottery may close its doors in a few years. Being family owned and operated, they're reluctant to turn the project over to anyone else if the next generation in their family doesn't want to take it over - and word is, they don't. So visit this American cultural landmark sooner, not later, before its reign of two centuries comes to an end.
Posted by JSH at 1:22 AM

Waco has some great pieces for pottery collectors. A precious Kentucky gem.