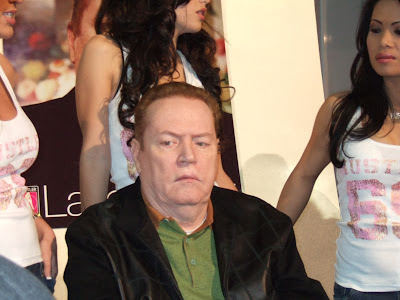 Kentuckian Larry Flynt, publisher of Hustler magazine, lays claim to being the world’s most famous pornographer, a title that not everyone would aspire to but one that he seems happy with. (His closest rival, Hugh Hefner’s Playboy magazine, is technically not pornography in the strict legal sense. Not to mention it’s boring.)

Flynt was born and raised in Salyersville, KY, population 1,604. (Saaaaaa-lute!) He attended public school there but dropped out at some point, due to problems at home between his bickering parents. Flynt began his enterprising ways at a very early age, bootlegging moonshine in the Magoffin County wilderness.

Flynt’s lasting contribution to society may not be so much for his erotica, however, but for his involvement in legal precedents. The entire legal definition of what constitutes “pornography” was shaped largely because of his pushing the limits of what could be gotten away with during the 70s and 80s. (These definitions, however, have since largely been made irrelevant by the internet.)

In 1976, Flynt fought anti-porn campaigner Charles H. Keating Jr. all the way to the United States Supreme Court on charges of obscenity and organized crime, and beat them. Keating went on to later fame as a convicted felon in the notorious 1989 savings and loan fraud scandal.

In 1983, Flynt refused to reveal his sources for a John DeLorean tape recording that was very embarrassing to the FBI, and showed up in court wearing an American flag as a diaper. For this act of “flag desecration,” he was imprisoned six months.

Also in 1983, Flynt lost a Supreme Court battle over insulting remarks made about rival publisher Kathy Keeton. The case, however, is frequently cited as an example in law school courses today, because of its implications regarding personal jurisdiction over a defendant. Flynt harangued the court with a slew of insults and obscenities and was arrested for contempt of court (the charges were ultimately dismissed). 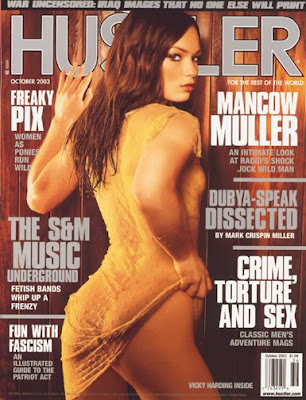 In 1988, Flynt successfully fought off a libel suit from the Reverend Jerry Falwell, over a satirical advertisement that suggested Falwell had sex with his mother in an outhouse. The Supreme Court sided with Flynt, eight to zero. The Falwell case decision cemented and affirmed the media’s right to satirically poke fun at celebrities in even the most brutal and cruel way.

Two other anti-porn activists, Peggy Ault and Dorchen Leidholdt, tried libel suits of their own after being named in Flynt’s “Asshole of the Month” column in Hustler. Both were dismissed with findings in favor of Hustler.

For most of his career, Flynt has faced legal challenges from the city of Cincinnati, a place which has often had a reputation for being a difficult place to exercise free speech (some constitutional activists have referred to it as "Censornati"). The city reportedly redrew zoning lines to deliberately make Flynt’s Cincinnati bookstore illegal, and sent an underage person in to purchase items there in a sting operation. He faced 26 years in prison but got off with a plea bargain.

Flynt is paralyzed from the waist down after an assassination attempt by White Supremacist Joseph Paul Franklin in Georgia (who claims to have been motivated to kill Flynt because of interracial sex being portrayed in his magazine). He makes an unlikely but effective warrior for First Amendment rights, and will probably be best remembered in this respect, especially after his portrayal by Woody Harrelson in the film The People vs. Larry Flynt.
Posted by JSH at 11:57 AM