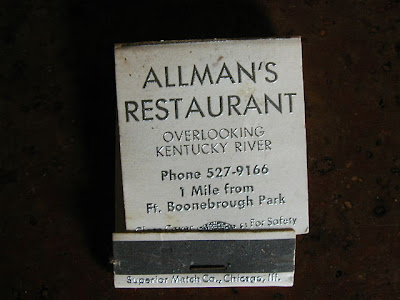 Johnny Allman's Restaurant was located along the Kentucky River in Boonesboro, not far from the present location of Hall's Restaurant. From the 1940s to the 1970s, it was a immensely well-loved spot, with mobsters, businessmen, bikers and "river rats" side by side, enjoying the fine food and the fine view overlooking the river. Even Sweet Evening Breeze was a regular diner there (and sometimes caused a stir by choosing to use the men's restroom).

Beer Cheese was invented at Allman's Restaurant in the 1940s. There are many who would have you believe that Hall's invented it. They did not. Today Hall's offers a very similar, but not quite the same version of Beer Cheese in their restaurant. The "Hall's Snappy Spread" sold commercially in stores is a totally different formula and nothing like what you get in the actual restaurant.

Allman's went up in a gigantic fire in the 1970s. I'll never forget the day my family and I drove down there about 6pm for dinner, only to find nothing left but a charred skeleton of the building, still smoldering. Allman's was such an institution that it was unthinkable that they wouldn't rebuild. So everyone waited. And waited. But the new Allman's never came.

All that remains now are the memories of that Beer Cheese that can never be tasted again, and scraps of effluvia such as those pictured here. We are attempting to track down pictures of the restaurant in its heyday. Do you have photos of Allman's Restaurant? Please e-mail us if so! 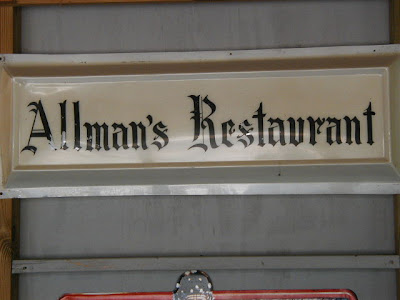 Did I say their beer cheese could never be tasted again? Well, that's not exactly true. Bob Tabor of Winchester is keeping the original Allman's recipe alive with his River Rat Beer Cheese which started out available strictly in the central Kentucky area but now is branching out all over the state. When I first tasted it, I almost cried. It is indeed, as their slogan states, "Just Like Johnny's".
Posted by JSH at 11:36 PM

I keep having memories of eating at a restaurant in Richmond in the downtown area that resembled a log cabin where they served steaks, etc, yet I don't remember if it was actually a place where I ate or if it was just something I dreamed once.

Any idea if there was ever a restaurant in the Richmond area that resembled a log cabin and served steaks?

A log cabin, eh? I don't believe so, at least except Cracker Barrel. Western Steer and Western Sizzlin' type steakhouses look sort of rustic on the inside, but not really like a log cabin. None of them are downtown anyway.

Johnny Allman’s Original Beer Cheese is being made again by Johnny's relatives.
http://allmansbeercheese.com
or see Johnny's son and wife Johnny and Marie Allman living in Johnny's old house across from the old restaurant place. You can reach them at allmonjohn@bellsouth.net

I made more than a few trips to Allmans in 1968-9 for the beer cheese and many pitchers of Pabst Blue Ribbon beer while at EKU and will definitely find the beer cheese mentioned here.