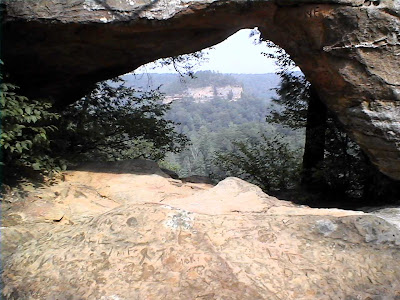 If the Brady Bunch had come to Powell County, Kentucky instead of Arizona, they would have saved themselves all the drama and danger on vacation. They could have even made it a side trip during the time they traveled to Kings Island amusement park near the Ohio-Kentucky border.

The grand canyon is much bigger, to be sure, and is a well-known national monument. But it's mostly a dead empty arid barren hole in the ground, whereas the Red River Gorge is literally pulsing with life and energy, resonating with mystery and power. This place has drawn many a seeker of the weird, as well as seekers of nature.

So what is the Red River Gorge, exactly? Well, when most people refer to it, what they're really talking about is a much larger general area known as the Pottsville Escarpment. This is a dense mountainous area of forests and swamps combined with elaborate rock formations and outcroppings, the kind most people only think of as being a feature of the Western United States. The actual gorge itself is but one feature of the escarpment - it's a huge canyon that includes natural bridges, waterfalls, and archeological remains of ancient civilizations.

This area is well known for being a treasure trove of petroglyphs (rock art) etched by members of those ancient civilizations. I'm not going to tell you where to look, because so many of these precious artifacts have been vandalized in recent decades.

The area is very popular with rock climbers, campers and outdoorsy types in general. You could spend your entire life here - and many have - and still not explore all this region has to offer. Among its many bizarre natural wonders are:

* Natural Bridge. This is what draws most people here first. It's a beautiful "natural bridge" rock arch with a breathtaking view. It has its own park with miles of nature trails. Nearby Hemlock Lodge provides food and lodging.

* Sky Bridge. Although smaller than Natural Bridge, I prefer this one because of the way it splits in two at one end, giving the effect that you're standing on an immense dinosaur claw.

* Hopewell Arch. So named for the enigmatic ancient Hopewell civilization that once roamed Kentucky, and about whom we know precious little today. Amazing examples of their elaborate burial mounds still exist, as well as mystifyingly beautiful works of art.

* Star Gap Arch. Another stunning natural bridge formation, less traveled than the others and a bit of a walk off the beaten path from Tunnel Ridge Road.

* Slade Twin Arches. Still more amazing landbridges sculpted by time and erosion. These are a lot harder to find because their location is improperly marked on a lot of common maps. Many more arches exist in Kentucky, such as Rainbow Rock in Logan County, Fishtrap Bridge in Laurel County, and Smokey Bridge in Carter Caves State Park, but the ones in Powell County are the biggest and best. 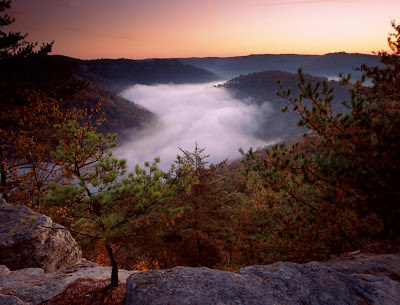 * Cloudsplitter Rock. This is but one example of the gorge's sizeable stone promontories that make for great camping in the fashion of prehistoric cliff dwellers. (It was near this spot that a Feral Human was encountered by the author, but don't let that put you off from visiting.)

* Revenuer's Rock. This was once used by law enforcement as a scouting vantage point to watch for moonshine manufacturing activity. Many a harmless campfire was mistaken for smoke from a still, and many an innocent camper was harassed by government agents, so this spot soon fell into disuse for this purpose.

* Nada Tunnel. This is a narrow tunnel into rock which Route 77 takes you straight through, with one-way, one-lane traffic. It was originally a railroad tunnel built for loggers in the early 20th century and now has a considerable reputation as one of Powell County's most haunted locales, with numerous reports of hearing strange and unidentiable moaning and thumping sounds coming from inside the Earth when you're in the center of the tunnel. It's such a dangerous tunnel that ghosts no doubt lurk here from a century of automobile accidents. Some claim the tunnel is haunted by the ghost of a man who died in an explosion while working on the tunnel's construction. It's over seven hundred feet long with no interior lighting, so turn your high beams on and proceed with caution. If you're on foot or on a bike, we'd advise you to go some other way and skip the tunnel entirely - don't get yourself killed trying to listen for the ghost sounds.
Posted by JSH at 12:00 AM

They have a miniature canyon in Lee County near the old Glen Eden School.