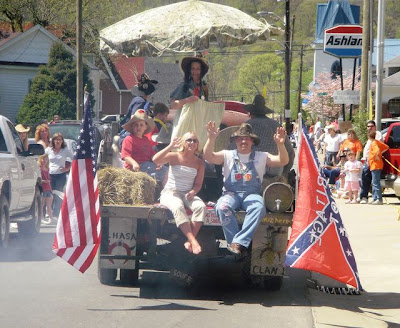 I've already vented, ranted, and pedanted about the suppression of the "hillbilly" concept on my previous entry about The Li'l Abner Motel, so I won't beat that dead horse again here.

Suffice it to say that some people find this festival uncool because it chooses to embrace the old-fashioned garish Snuffy Smith hillbilly stereotype in this brave new modern space-age Splenda-drinkin' wi-fi world. Some think it makes Kentuckians "look bad" and "look silly" (as if the two were synonymous). I love it for the very same reasons those uptight folks despise it. After all, I am a hillbilly myself. I think they should declare being a hillbilly to be designated as an "alternative lifestyle", protected from discrimination by law.

However, the Pikeville Hillbilly Days isn't just a good excuse to run around in overalls and a corncob pipe - it's for a good cause. The event, which began in 1977, is a fundraiser benefitting kids at the Shriner's Children's Hospital in Lexington. It was started by Howard "Dirty Ear" Stratton and "Shady" Grady Kinney, two Shriners with the Hillbilly Clan Outhouse No. 2 in Pikeville. 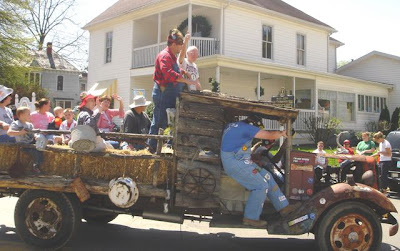 i want to come to hillbilly daysand bring my friend Jack.He's been to pikesville years ago but ddnt know they had that going on. maybe come on to my website
http://www.hillbillyjack.com