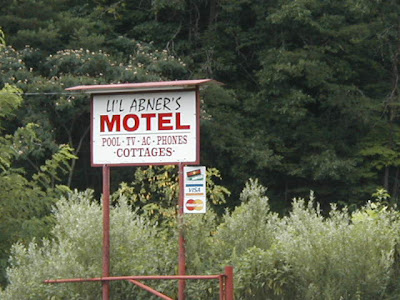 There are basically two types of Kentuckians.

(Don't you love it when someone starts a speech that way?)

It should come as no surprise to the dedicated reader that I am of the former group, the True Group, the unrepentant hillbillies, the rightful heirs to the soil of Transylvania.

At one time, the hillbilly stereotype was a common fixture across the tourist traps of the South, as shrewd hucksters were "puttin' on the hick" to razzle-dazzle the know-nothing Northerners who came to gawk and learn the arcane mystic arts of miniature golf.

Nowadays, those places are a dying breed, what with the politically correct mindset reinforced by too much internet, too many cable channels, and too much toxic Nutrasweet and Splenda in the diet sodas.

That's why it pleases me to no end to find that references to Al Capp's gloriously Southern comic strip Li'l Abner can still be found in Kentucky. It's one of the funny ironies of life that Capp wasn't even a hillbilly himself. He spent his entire life in Boston, New York, and Connecticut and got his knowledge of hillbilly lore thirdhand. And yet, his viewpoint was right-on (at least until the late 60s, when he abruptly turned politically ultra-conservative - slightly to the right of Attila the Hun - even as his infamous lecherous nature become even more out of control.)

Anyway, in summary: boring normal people want to keep the hillbilly meme down. The existence of places like the Li'l Abner Motel help keep it alive. Therefore, it is good. Next time you're looking for lodging in the Red River Gorge area, give them your business and tell them I sent you by.
Posted by JSH at 11:51 AM