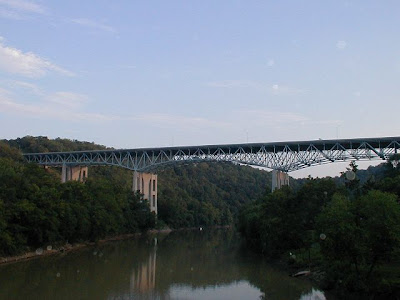 A report filed with NUFORC:

Disk-shaped object hovering up in the sky and traveling slowly for about 20 minutes with a brief flash of light coming out of it.

"I was traveling down I-75 last night coming back to Lexington, Kentucky from Richmond, Kentucky where I attend graduate school classes.

It was directly in my line of sight right before the curve towards the Clays Ferry Exit. The sky had a few clouds but it was mostly clear. I saw it straight ahead and I saw a flash of light come from the other side and traveled halfway around the object and stopped. It did not flash all the way around the object. It only flashed once. It was a disk- shaped object that was a dark color like a dark grey or brown, not quite black.

The interstate wound around and the object was no longer in front of me but it was traveling along to my right. I was straining my eyes to see legs to a water tower, or helicoptor propellers, or wings to an airplane, but there was none of that. It was not a water tower because for one thing, I found out that it was moving and there was nothing sticking out of the object like wings or propellers. It was definitely going too slow to be an airplane.

The only other thing I could think of would be a blimp of some kind but it didn't have any kind of writing or basket and I don't know if those have lights. Also, it was 8:00pm on a Monday night and no events going on that would require a blimp that I know of and it simply did not look like a blimp. However, I am trying to justify this because it goes against everything I believe in or ever thought possible.

This thing was traveling in my line of sight for about 20 minutes. When i got off on the Man-o-War exit I turned the wrong way so that i could follow it and take a clear picture with my camera phone. By the time I could stop it was too far away to see it in the picture. My camera phone is not very clear at all, anyway. It just kept traveling away from me and I gave up and turned back around and went home.

I am just a Nutrition grad school student and I do not have any expertise in the aircraft area. All I know is what I saw. Can someone please tell me what this thing might have been? I need some peace of mind."