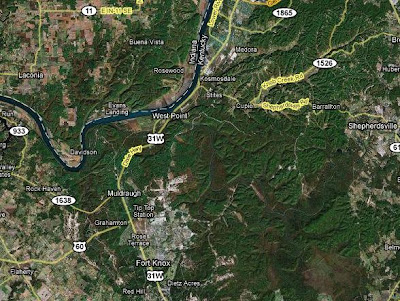 The stretch of Highway 31W, or “Dixie Highway,” that takes one out of Jefferson County has long fascinated me. It may not exactly be a “road less traveled” - in fact, the traffic can often be quite annoying - but it’s a road that many seek to avoid. It should come as no surprise to the reader, then, that’s it’s a road I enjoy greatly, for the very same reasons that others shun it.

Dixie Highway, to many people’s sense of aesthetics and decorum, is ugly. Dirty. Tacky. Businesses abound that still have that beautiful classic 1940s-1960s architecture and signage, which I’ll take any day over the dreary modern homogenized look. One of my favorite places here is Pepper Tackle, a fishing supply store whose sign features a gargantuan fiberglass fish. City officials, who wouldn’t know cultural beauty if it bit the psoriasis off their elbows, have made attempts to have the sign removed over various contrived technicalities. So far the enemy’s efforts have been unsuccessful. The price of eternal awesomeness is eternal vigilance.

And then there’s Rubbertown, where all sorts of pleasant substances are manufactured, and many more are sloughed off. You’ll know it when you come upon it - look for the giant belching smokestacks. You can’t miss it. You also might smell some funny smells while passing through this area, but don’t worry, they wouldn’t be allowed to send toxic chemicals into the air, right? Responsible and far-sighted men in local and federal government have entire careers devoted to keep that from happening, right?

There’s an environmental activist group in Jefferson County called REACT, which stands for Rubbertown Emergency Action, who describe themselves as a “campaign to stop toxic air pollution coming from ten chemical plants located in the Rubbertown area of Louisville,” and go on to say: “Air monitors located in neighborhoods surrounding the chemical plants revealed that residents have been breathing in at least 18 toxic chemicals at levels sometimes as high as 540 times the health threshold established by the EPA.” The 18 toxic chemicals detected by the air monitors, chemicals such as 1,3-butadiene and vinyl chloride, can cause cancer, cardiovascular disease and central nervous system damage. REACT is a campaign of Rubbertown residents who have finally said, “Enough! We're not taking it anymore”, and are taking action to end Rubbertown's 'killer air.'

The history of Dixie Highway is as convoluted as its terrain. As I understand it, in 1914 it was decided to create a series of highways and roads that were generally regarded to be one unified highway, even though this included side roads, connecting roads, and multiple branches. Today Dixie Highway’s meandering paths have been renamed piecemeal, dependent on location, and now make up portions of other highways, such as U.S. 25. Most Kentuckians no longer refer to these roads as “Dixie Highway,” but the stretch of Highway 31W that we are discussing here is still referred to by that name by its locals.
Posted by JSH at 1:19 AM

I am glad I am not the only one who appreciates the uniqueness and intrigue contained within this stretch of Dixie Highway. I am most familiar with the area from Radcliff to the Gene Snyder Freeway Exit. Some other Places of note besides Pepper Tackle are The Junk Store(which used to have the caption "Trash and Treasure" under the title), Biffs Gun World (which until recently had a nice collection of clutter adorning its front facia), an old Burger Boy Diner, a plethora of strip clubs, the Kosmos concrete plant, Al's Bait and Beer Depot (which appears to be a bait shop and a Bar), Just Add Water Marine (I love that name), and the strange little town of West point. There are so many more places that deserve a unique mention in addittion to these. I am not a Kentucky Native and this highway always has new and interesting sites that I could never find in my home state of Illinois. Kentucky is the only state where you might find a Mansion next door to a trailer park.....I just love that about Kentucky and Dixie Highway is the best example of this unique mix. I am proud to be a Kentucky Transplant!

There used to be an old tavern near the corner of Heaton Road and Dixie Hwy. It was a HUGE frog if I recall correctly the tavern was named the Dew Drop Inn?

It was the Toad Stool Inn (a bar within the motel which was the Royal Inn, I believe).

Before the Toad Stool Inn was in Royal Inn it was a resturant/bar on the east side of dixie on a corner that is now either a car lot or a lawyers office. I went there with my parents when I was a preteen .