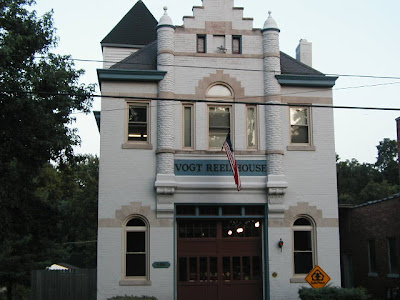 Built in 1904, the Vogt Reel Firehouse is Fayette County's oldest continually operating firehouse. It also happens to be very haunted, according to the accumulated lore of several generations.

Some believe the ghost is that of Henry McDonald, a volunteer fireman who refused to retire and eventually died of a heart attack while on the job at the age of 68.

Others claim the haunting legend goes farther back than that, and that "The Phantom", as they affectionally call the ghost, has been attached to this land perhaps even before the firehouse was built. The property was a wooded lot until Lexington councilman Henry Vogt donated the land to the city, who in turn named the subsequent building after him.
Posted by JSH at 1:56 AM