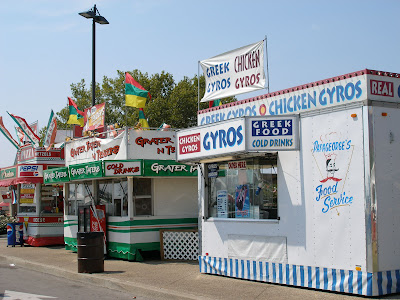 All states in America have their own annual State Fair - at least I assume they do - and I've been underwhelmed by the few of them I've visited. The very notion of the "State Fair" seems to be something fading into the past for many regions, either devolving into a mere modern carnival-ride event or degenerating into apathy.

Not so with Kentucky. The old-school rural charm of a real State Fair is still here, with 4-H awards, vast displays of corn and hay for absolutely no reason but for the sake of looking at corn and hay, sheep-shearing, goat-shaving, cow-polishing, and pig racing. (Yes, we said pig racing. Once you see it for yourself, you'll never care about the Kentucky Derby quite as much again.)

The immense seated (and talking) statue of Freddy Farm Bureau is dragged out to the fair every year to entertain the masses in much the same way that Muffler Man "Big Tex" addresses the crowds at the Texas State Fair. 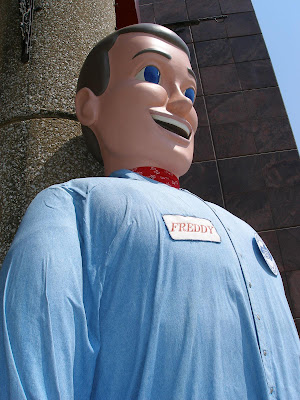 An art exhibit is held at the fair every year, in which anyone in Kentucky is welcome to hang their own artwork, from toddlers to grandmas. And they do. No one I know has been able to take in the entire exhibit at once, including myself. For the first couple aisles of it, you're simply chuckling to yourself about the amateurish art, but then you gradually start to see the sheer raw genius in much of it and develop a dizzying sense of newfound respect for all humanity. But then it all becomes too much and you find yourself feeling fevered from the sensory overload of naive art. Crude drawings of fighter planes and pro wrestlers rendered on lined notebook paper in ball-point pen. Extremely labored and ill-conceived paintings of
angels, Biblical figures, cartoon characters, elves, puppies and babies. The horror. The horror. And yet, who can say it isn't beautiful?

Even wackier is the "Critters" display of the produce exhibit, in which people are encouraged to look for weirdly shaped and anthropomorphic vegetables, and show 'em off. (Sometimes considerable artistic license is taken, and faces are simply painted right onto a tomato.) 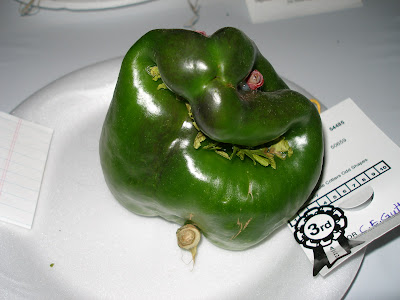 To truly know Kentucky, you simply have to attend its State Fair. I can't recommend it highly enough to everyone reading these words. Rodgers and Hammerstein it ain't.
Posted by JSH at 10:51 AM