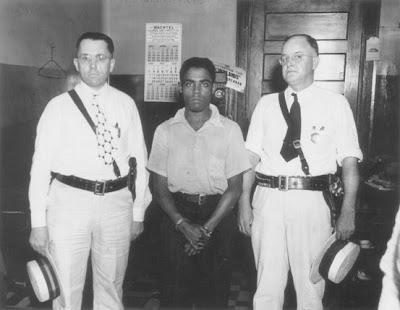 Ever seen a film or read a story where everyone on both sides, both the so-called good guys and the so-called bad guys, are unlikable and unsympathetic?

This is one of those.

A young African-American tobacco farm worker from Owensboro, Bethea was free on parole from a prior theft conviction in 1936 when, it is said, he climbed into a window of an apartment belonging to a 70-year-old woman named Lischia Edwards. Bethea later confessed to raping her, strangling her to death, and robbing her.

It was a peculiarity of Kentucky law in 1936 that unlike other capital crimes which carried a sentence of electrocution in Eddyville, rape carried a sentence of local public hanging. The prosecuting attorney chose not to pursue the more obvious murder charges and only charged Bethea with rape, to insure that he would be publicly executed and an example made of him in Owensboro.

Bethea expressed doubt in court whether Edwards was still alive during the rape, and this was a considerable point of contention during the trial, since at that time there was no law regarding sex with a corpse. Because of this, the prosecution very nearly risked the entire case by pushing for a rape conviction rather than murder.

Bethea’s lawyers called no witnesses and cross-examined no one. According to Bethea, they urged him to plead guilty against his better judgment. A new team of lawyers later tried to call for a new trial, but it was too late. Their request was denied by both the Kentucky Court of Appeals and the U.S. District Court.

As so often happened with public hangings, throngs of sightseers and rubberneckers showed up for the spectacle, giving it an ambience not unlike a carnival or a county fair. The current sheriff was female, so there was a perverse excitement in the crowd about getting to see a woman killing a man live onstage. However, she ultimately chickened out and delegated the onerous task of pulling the trap door switch on the gallows to a police officer from Louisville.

There was so much ugliness - on both sides of the law - in this incident that it was directly responsible for the end of public executions in Kentucky.
Posted by JSH at 12:54 AM