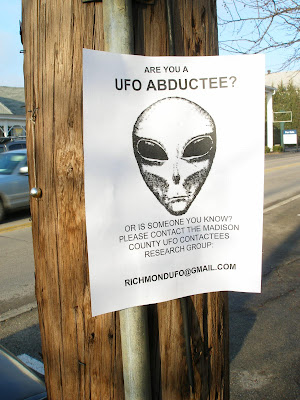 It's difficult to assess the impact of the alien abduction phenomena in any given area because people are so reticent to talk about their experiences. I've met with many people who are absolutely convinced they have been abducted by aliens, but are unwilling to tell their whole story, much less submit to hypnosis, testing, etc. They seek no fame or glory or attention, and are in fact often too embarrassed by it to go into much detail. Therefore, they don't turn up in the casefiles of most online armchair UFO enthusiasts. But they are indeed out there.

Abduction counselor Donald Worley writes of his encounters with abductees from Kentucky and Indiana who display a demonstrable ability to disrupt "electron flows" in any given electronic devices nearby. Driving or walking under street lights may cause them to go on or off. Radios, computers, all manner of electronic equipment can be affected by whatever is happening to these people. The energy coming from these abductees, Worley says, is undetectable yet obviously causing an effect, and seems to be intermittent.

An organization called SOAAR, (Southern Ohio Alien Abduction Research) also deals with cases from nearby Kentucky, which they publish on their website. One such case, "Mark" (name changed), tells of alien encounters throughout his life, from a childhood UFO encounter in Nicholasville to visitations in his dorm room in Morehead, to a visitation with missing time somewhere between Lexington and Mt. Sterling. Another SOAAR casefile, Louisville subject "Danny" (also not his real name), underwent regressive hypnosis to recall his abduction experiences in which he and his mother are captured by aliens in a triangular craft, stripped naked, and held prisoner together in a strange room aboard the vessel.
Posted by JSH at 1:31 AM