The Death of Thomas Mantell 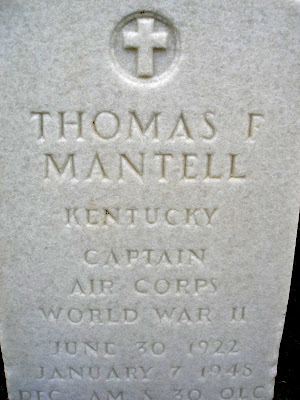 1:15pm : Officials at Godman Air Force Base outside Louisville, KY receive a call from Kentucky State Police regarding UFO sightings in Maysville.

1:35pm : KSP calls Godman Air Force Base again. The UFO has been seen in Owensboro and Irvinton.

1:45pm : The UFO is seen approaching the base. Control tower ascertains that the object is not a weather balloon or a plane. It is described as
gray, metallic, conical, and rotating.

2:30pm : A team of four F-51 fighters planes approach the base. The tower called the flight leader, Captain Thomas Mantell, briefed him of the situation, and asked him to investigate. One F-51 in the flight was running low on fuel and continued on his course while Mantell took his other two planes and went after the UFO. Mantell sights the UFO above him and follows it to 20,000 feet while his men drop back at 15,000. Mantell is nowhere to be seen and doesn't answer the radio.

3:50pm : The control tower loses sight of the UFO.

Mantell's plane crashed 130 miles away and appears to have belly flopped straight down, which is totally inconsistent with a plane crash of this type. There should have damage to surrounding woods from an angular trajectory, and the nose-heavy weight of the plane should have brought it down nose-first . Although the wings and tail had broken off, the fuselage sustained little damage, and no blood was evident in the cockpit. Mantell's body had already been taken away, but Duesler was allegedly informed by others at the scene that "nowhere on the body had the skin been punctured or penetrated, yet all the bones had been crushed and pulverized."

The Air Force maintained that Mantell must have been chasing Venus and ran out of Oxygen. After it was pointed that Venus was nowhere near that position in the sky at the time, they changed their story and insisted it was a balloon that Mantell was chasing.

Mantell's body was laid to rest in Louisville's Zachary Taylor National Cemetery.
Posted by JSH at 12:07 AM