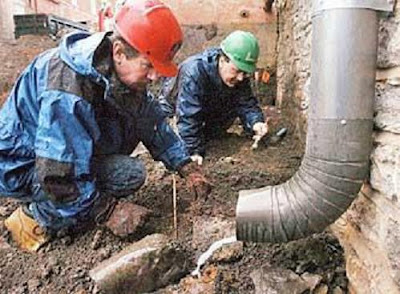 A few years back, workers digging in a Lexington construction site where the former South Hill Station was being converted to condominiums made a disturbing find: very old human remains.

Archeologists descended upon the Bolivar Street site, and their digging produced many more bones. Apparently, they've rediscovered the lost and forgotten Maxwell Cemetery, which originally stood on the site until buildings were unceremoniously erected right over it. Oops.

According to an article in the Lexington Herald-Leader, among the persons buried there are John Maxwell, one of Lexington's original founders, and the Rev. Robert Cloud, an "eccentric minister". No wonder South Hill Station was such a miserable failure - obviously the place is cursed, and I'd say it's certainty there's a high likelihood of unfriendly hauntings in the condos that occupy the land now. (Have any reports of ghostly activity there? Contact us!)
Posted by JSH at 12:31 AM