The Raelian Movement in Kentucky 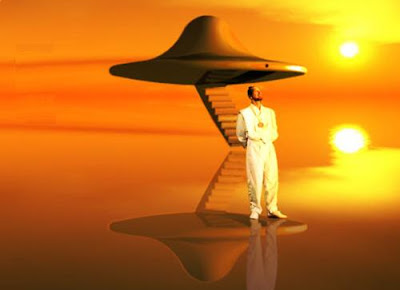 In 1973 a French racing-car journalist named Claude Vorilhon (who now calls himself "Rael") began having a series of visitations from extraterrestrial entities called the Elohim. According to Rael's bizarre writings, these beings reportedly wore swastikas and explained that the original, pre-Nazi meaning of the symbol is that "all is cyclic in infinite time" (and in fact, the swastika is an ancient symbol that predates the Third Reich’s twentieth-century appropriation of it).

Rael claims that the Elohim told him they created all life on earth thru a process very similar to cloning; he was given instructions to build a "space embassy" on Earth for the purpose of spiritually preparing mankind for the Elohim’s grand return, and to found a so-called "atheistic religion".

Eventually this became the International Raelian movement, headquartered in Las Vegas. Kentucky has a chapter as well - I've met with Carla Watson, the local contact person for the Kentucky Raelians, and found her enthusiasm for Raelism to be sincere and evident.

Try though I may to remain open-minded about this group, though, I can't get behind things like this and this and this.