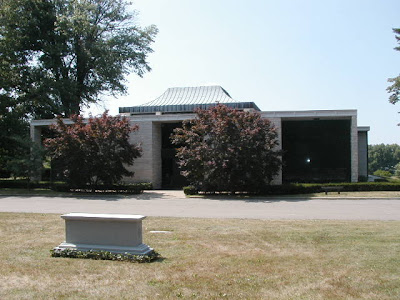 We've heard plenty of anecdotal stories about the mausoleum at Lexington Cemetery being severely haunted, with disembodied voices, noises, and even screams being heard here. Another story tells of a "mysterious shadow" that is seen moving around at the rear of the building. Another report states that the place has an overpowering feeling of anger radiating from it.

Not sure if anger is exactly the vibe I get from it, but there definitely is some sort of uncomfortable feeling I sense radiating from this place, and not just because it's a mausoleum. I get a somewhat suffocated and claustrophobic feeling inside here, even though it's very open and spacious. Of course, the suffocated feeling could derive from the fact that the place smelled awful the last time I was there. It was like they'd tried to cover something foul with aggresive amounts of Ozium, or that stuff that's supposed to give your car that "new car smell" again. 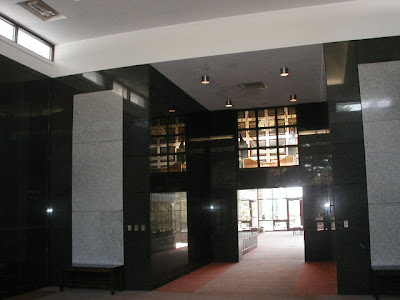 Somehow I came across your site (which is just great) and this post about the mausoleum while doing some research...there is another mausoleum dedicated to the original superintendent of the Lex Cemetery called the "Bell Mausoleum"? It's on the Lexington Cemetery website. I wondered about the reports of a black shadow and voices, because when I went to the Lexington Mausoleum I did not get anything weird. Except for the weird smell-which may be attributed to lots of dead flowers and dying plants, though. I will let you know if anything seems amiss at the Bell Mausoleum.