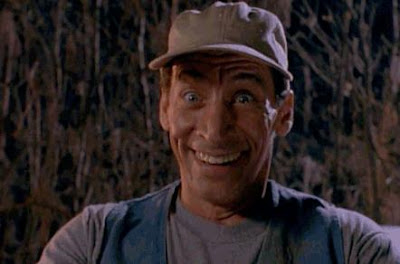 One of Kentucky's weirdest celebrities ever was the great Ernest P. Worrell, better known to his mom as Jim Varney. His character, which began in TV commercials and ended up spawning a movie empire, was something like a hillbilly Pee-Wee Herman meets Larry the Cable Guy meets Ace Ventura, but years before any of them. Ernest was definitely ahead of his time.

Most people don't even realize Jim Varney was a Kentuckian, and even fewer realize he's buried in Lexington Cemetery. When you enter the cemetery, veer left and watch for his grave on the right-hand side.

Among the many fascinating films in the Ernest oeuvre: Ernest Rides Again, in which Ernest and a professor must protect an antique Revolutionary War cannon from thieves; Slam Dunk Ernest, in which an angel (played by Kareem Abdul-Jabbar) gives Ernest a pair of magic shoes that enable him to play pro basketball; Ernest Goes to Africa, wherein Ernest and his girlfriend are inexplicably kidnapped and taken to Africa over some stolen jewels; and Hey Vern, It's Ernest!, a Saturday morning children's television series. 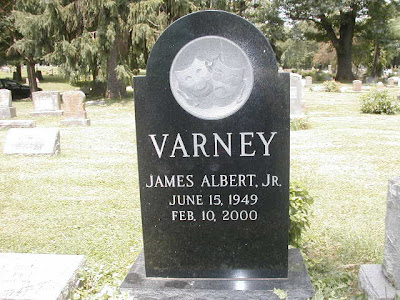 Varney's final work, Ernest the Pirate, had completed shooting and was in post-production at the time of his death, but still remains unreleased.
Posted by JSH at 9:09 AM

You forgot Ernest goes to Camp and Ernest Scared Stupid... man those were great movies.

Varney's Ernest always reminds me a bit of Ernest T. Bass on The Andy Griffith Show.

Jim and I grew up in the same neighborhood in Lexington. He knew he wanted to be an actor when he was 12 years old. He was a great magician and would perform anywhere, anytime. He was always humble, kind and generous. His true personality reminded me of Richard Burton. I talked with him several years after his acting career blossomed and he was the same Jim Varney that I knew when we were teenagers.

Fewer still know that he was classically trained and a Shakespeare buff.

Once, after "boging", he was reciting some lines from Hamlet.
After a few minutes of elegant verse, he looked, and said "know what ah mean".

The guy was brilliant.

I have a tape of his singing several songs, all of which he wrote, with one exception. Both the writing and renditions are wonderful. I have heard that he really had wanted to get into singing as well; sure wish he had.

How I wish that someone with authority who has a copy of the tape would find a way to release a CD- I am certain it would be a hit. Two of the songs are number 1 material. I have some knowledge of the field as I grew up in the business and my dad was n Academy Award nominee (lyricist).

Jim Varney was a remarkable and compassionate man; he is sorely missed.