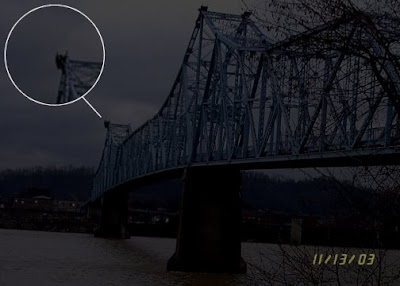 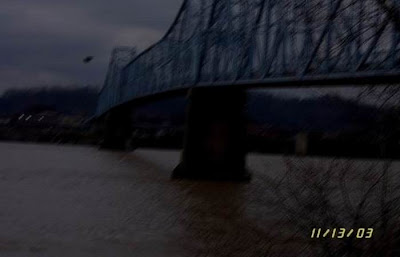 These two photographs have been circulating the net for several months now, and are alleged to be a Mothman sighting on a bridge connecting Russell, KY and Ironton, OH.

I'm not buying it, for several reasons; not the least of which is that I just don't believe in the "Mothman" in the first place. I'm also troubled by the fact that the two jpgs are small and of different sizes (where are the originals?). And it sure is a coincidence that the Mothman is seen clinging to a bridge on the Ohio River, just as in its original alleged 1966 sighting. The photos are claimed to have been taken in the evening near dusk, yet the second photo of the "Mothman" leaving shows a considerably lighter sky - indicating that the photos were taken in the morning as the sun is rapidly rising.

Finally, the story that the couple who took these photos claim to have seen its red eyes glowing - even from that huge distance - is just plain silly.
Posted by JSH at 6:51 AM

Mothman s*cks but not as much as that guy that wrote the ghost hunting book.

You really should get your facts straight. The eyes on the creature in Russell, Ky. were not glowing, they were reflecting the ambient light. I can assure you the story and the photos are real. And the pictures are the original scanned photos, edited by me to enlarge the area where the creature is on the bridge. As a matter of fact, that's why they were given to me..Read the whole story here:

just wanted to say that the change in lighting isnt from the sunrising. it is because the photograph was brightened during editing. not that it helps to prove or disprove just making sure any debunking or proof is done with correct info.