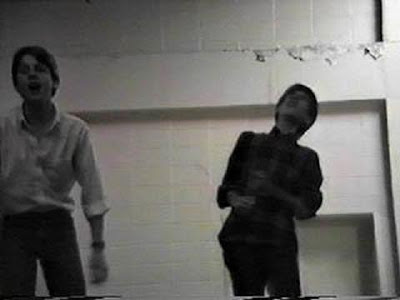 Today is CRC day, commemorating the great obscure 1980s Madison County garage band Central Rock Company, who I played with back in the day. Drink a toast tonight to all weird teenage bands that existed mostly in their own bedrooms and backyards.

Who are Central Rock Company? Historian Mitchell Newport, in his 2003 treatise That Low Gruesome Sound, described them this way:

"Central Rock Company - who took their name from a local quarry business - were two high school misfits (Shay Quillen and Kurt Adams) who performed a highly peculiar act. It consisted mostly of jumping up and down with way too much teen angst and singing mostly acapella versions of 1980s hits mixed with original tunes of their own, such as "Polka De Pineapple", "Upon Hearing That Supergirl Is Dead", and "Penis". Sometimes they were backed up by a motley gang of local kids (called "the CRC Dismembers"). Jeffrey Scott Holland also played guitar on some of their studio sessions for JLK Records, and at an infamous party gig in Shay's back yard. After a handful of cassette releases that did generate some attention in their community, CRC dissipated in 1987. Strangely, these highly adrenalin-pumped kids, whose puerile and childish antics were rivaled only by RV & OI, abruptly grew up and moved on past such silliness. At least for a while."

And what exactly is CRC Day? Well, it's an old tradition increasingly practiced only by old-guard enthusiasts of the "Creeps Scene", commemorating a line from their song "Sitting In My Room" where chants, "It's the 29th of June and I'm sitting in my room".