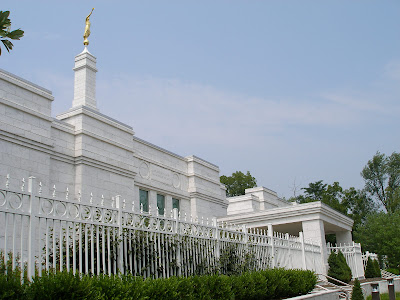 One of the most unique and visually striking buildings in Oldham County is this Temple for the Jesus Christ Church of Latter Day Saints. It has the authentic look and feel of an old marble Temple but was actually built in the year 2000.

The Temple is also known as the 76th Operating Temple, and/or the "Louisville Kentucky Temple", even though it's not actually located in Louisville. According to the LDS Church Temples website:

Elder John K. Carmack of the Seventy and president of the North America East Area who presided over the groundbreaking services for the Louisville Kentucky Temple, spoke on the importance of temples in the life of the eternal family. Joseph Smith was intensely interested in the work of temples in the later years of his life, he noted. Having built the Kirtland Temple, laid the groundwork for two temples in Missouri, and nearly completed the Nauvoo Temple, the Prophet was "preoccupied" with temples and seeing that the Quorum of the Twelve had received the ordinances. Elder Carmack pointed out that "the way we live here has consequences in the next life." He then quoted Hugh Nibley in saying that ordinances create order from chaos, and that like an observatory, the temple helps one get a bearing on the universe. 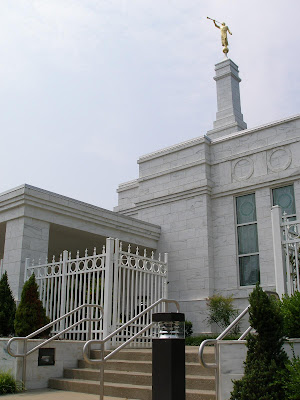 The exterior of the edifice is white marble (quarried in Vermont) with a solid gold statue of the angel Moroni on its spire. Joseph Smith said this angel visited him on September 22, 1823 and several other subsequent occasions.
Posted by JSH at 12:08 AM