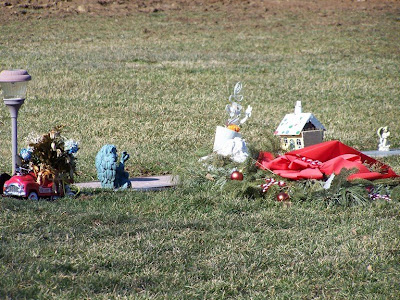 This is an article from Elizabethtown's News-Enterprise that I saved a few years back, and used to have featured on the old Unusual Kentucky website back in the day:

The death of an elderly Rineyville woman who was convicted of grave violation for swiping items left at the graves of numerous children has brought a small piece of closure to some families.

She was convicted of stealing hundreds of stuffed animals, wreaths, toys and trinkets left on the resting-places of babies and small children by their families and friends.

But Dupuis herself will not have a grave marked with flowers, candles or other gifts left by mourners. The only relative listed on her obituary is a nephew who is currently serving a lengthy prison sentence.

"I hate it that someone passed away," said Kevin Young. Items were stolen numerous times from his daughter Alexus Nicole Young's grave. "But maybe there is some peace for us knowing that maybe something won't happen to her grave anymore."

Kevin and Jamie Young have visited their daughter's grave at least once a week since she was stillborn in March 1999. He said they always went to spend time with her, but there was also the added fear they'd find something missing.

He said he and other parents who were victimized began to mark the items left on graves with their names and other information for identification purposes.

"We'll still do that," he said. "Because she's not the only person who has ever done this."

Donna Heaverin, whose daughter Madison Adair Heaverin died after 56 minutes in July 1999, said she feels some relief with Dupuis' passing.

"I'm not glad she died, but now maybe I won't worry so much," she said.

Heaverin said all of Madison's stolen gifts except a wind chime were found in Dupuis' home and returned by authorities.

Dupuis served several stints in jail in the last five years, twice for four months each, for the crime of violating graves, a misdemeanor.

Despite her claims in court that she was not a threat to commit further crimes because of her age and health, Dupuis was also convicted for stealing license plates and vehicle registration decals from stores and car lots in Jefferson County in 2002.

A search of her home by the Hardin County Sheriff's Office in the spring of that year yielded 422 items stolen from graves, mainly from Elizabethtown Memorial Gardens Babyland.

Sheriff's Detective Bob Hornback said at the time that Dupuis was known to frequent other cemeteries and that the house "was quite full of trinkets."

Although she claimed she couldn't get around well, several families visiting cemeteries caught Dupuis running away and fleeing in a van when confronted with stolen items in her hands.

Major Bob Baker with the Sheriff's office said in 2002, despite her age, "she can run like a deer."

Long recognizing the theft problem at Elizabethtown Memorial Gardens, Baker said the sheriff's department spent more than 100 hours watching the cemetery, even setting up surveillance equipment to catch the thief.

It is also unclear when, if ever, Dupuis had a driver's license. Searches of driving records found no record of anyone by her name.

That's just bizarre! And some of it's kinda funny...like picturing an 80 yr old "running like a deer"...Granny from the Beverly Hillbillies comes to mind!:)