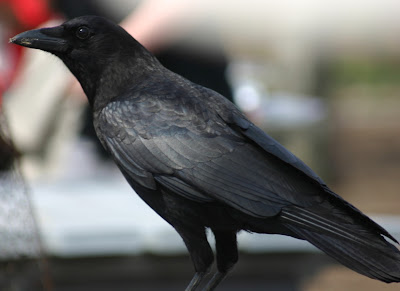 Georgetown, KY is the final resting place of a most unlikely legend: Pete the Talking Crow, who is said to be buried in a coffin with no grave marker somewhere on the campus of Georgetown College.

Details are sketchy on wherefore Pete and his owner, one Dave Adams, came to be in Scott County, but we do know that Adams ran a hat shop in downtown Georgetown and that his trained bird Pete was a constant companion around town. According to one account, such reknown was Pete's that he was permitted to enter restaurants on Adams' shoulder. According to another, Adams taught Pete to yell "Go!" as a practical joke at small racetracks, confusing the horses and causing races to start prematurely.

In 1832, Pete was shot and killed by some idiot kid with a rifle. But Pete's memory lives on today, in the form of a Japanese animatronic robot currently on display in the Georgetown & Scott County Museum.
Posted by JSH at 8:03 PM