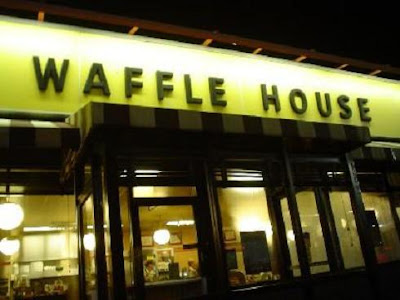 I'm tellin' ya, Kentucky is one spooky place, all across the board, and I maintain that we are all, at any given moment, swimming in a sea of unseen ghosts and otherworldly critters and we just don't know it.

Case in point: just an hour ago, I was having lunch at the Waffle House in Jeffersontown, KY (1620 Kentucky Mills Drive) and the jukebox was silent for most of the meal. Then, one song came on by itself without anyone having put any quarters in it. Then it went back to silence. I thought it rather odd, since every other jukebox I've seen that has an automatic-play feature runs continuously, not just playing one random song and then stopping.

I mentioned it to the waitress, who informed me in no uncertain terms that the Waffle House is haunted and that strange things like that happen so regularly that they're all used to it. Another waitress standing nearby nodded in affirmation, and mentioned that towels have flown by themselves, and so have these plastic containers they use in the kitchen.

The first waitress speculated that the spirits may have followed her to work from her own home, because she once lived in a very haunted house in Louisville with the exact same kind of poltergeist activity. She told of large art-glass bottles falling by themselves from atop a fishtank, not breaking when hitting the floor, and spinning to point all in one direction. She also told of rumors that a child was killed in her home, and that she discovered a creepy room in her basement, where someone had once lived, but was boarded up and hidden behind paneling. She's since moved from this house, but reports the ghostly phenomena still follows her, both to her new home and to her job at Waffle House.

She seemed extremely sincere and somewhat frazzled about having to endure the haunted weirdness. There was no sense of spinning a grand yarn to shock or impress; she was very blase and matter-of-fact about the ghosts in her life, which seem to have taken root in her workplace as well.

Needless to say, I will be making repeat visits to this Waffle House and having further chats with said waitress.
Posted by JSH at 12:27 PM