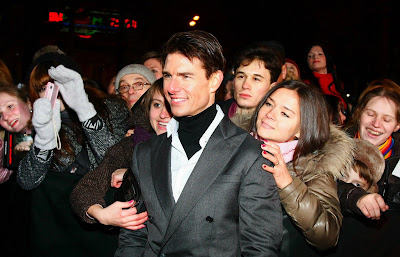 You know, I personally don't think he's all that weird or unusual, but I'm including him here because I understand that some people do. (I don't get the whole furor over him jumping on Oprah's couch - I see other stars do far sillier things for attention, every single day of the week.) Cruise (real name: Thomas Cruise Mapother IV) lived in Kentucky as a child and was a paper boy for the Louisville Courier-Journal, although his family was often uprooted as his father's line of work kept them moving around.

Cruise, known for films such as Magnolia, War of the Worlds, Minority Report, Interview with a Vampire, and fellow Kentuckian Walter Tevis' The Color of Money, currently devotes much of his time to activities with that spooky space-age religion but still finds time to visit Kentucky occasionally, visiting relatives and associates and, of course, attending the Derby.

He'll always be one of the finest actors in Hollywood, for my money, regardless of what controversial hi-jinks he gets up to next (and his upcoming Nazi movie is sure to provide plenty of that!).
Posted by JSH at 1:05 PM