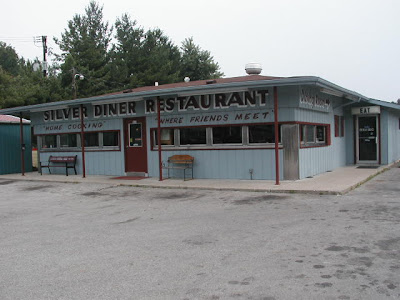 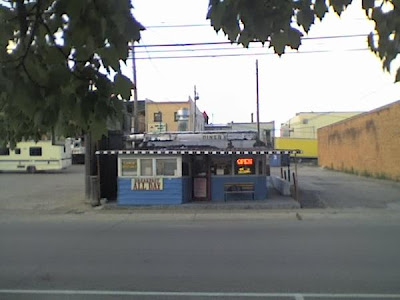 The older you get and the more things change, the more stuff gets complicated. I find I'm gradually turning into one of those old codgers who, when asked directions, tell you "we-e-llll, you go down what used to be called Walnut Street, then take a right at what used to be Grimplemeyer's Florist, and then you'll see the vacant lot where the old Fonebone Building used to be."

Back in the day, there was Cain's Diner in downtown Richmond, across from where the old post office used to be on Water Street, see.

Meanwhile, in Laurel County, we had the fine, fine, super-fine establishment known as the Silver Diner in London, KY (see first photo). The Silver Diner was always a favorite retro-eatery of ours, and was featured on our old site for years. Sadly, I hear tell that The Silver Diner of London has closed its doors.

But this morning it was brought to my attention that Cain's Diner is under new management yet again (for like the third time - Cain himself passed on years ago) and has now changed its name to, yes, you guessed it, the Silver Diner (see second photo). As if all of this isn't confusing enough, the MySpace page for this new incarnation of Cain's/Silver Diner is called Mama Carol's Diner. It's baffling, it's mystifying, it's more than one man can stomach.

Just prior to starting this blog entry, I made a phone call out to this diner car once called Cain's and now called Silver and maybe also called Mama Carol's, to try to sort out the tangled strands of factoids like spaghetti in the chili. Unfortunately, I was told by whoever answered the phone that they were too busy to talk. And that's fair enough. If I was a businessman in a hurry at their lunch counter, I'd be sayin' "get off the raprod and bring me my damn pancakes, lady" myself.

I look forward to trying the grub at this new improved version of the diner and if you've eaten there lately yourself, send us a report!
Posted by JSH at 10:56 AM

What was once Opal's (a diner that originated in Mc Kee in Jackson County, Kentucky; and that spread out into other surrounding counties) in the Richmond Mall, is now called Mama Carol's. I heard that a new Opal's was going to be in downtown Richmond; however, I haven't seen it yet.

Cain's served a great lunch, with a selection of homemade pies, including a rhubarb/strawberry that was fantastic. Mr. Cain was more than just a little prejudiced. A sign hung above the counter that read "we reserve the right to refuse service to anyone". This was a replacement for the previous sign that used a not so pleasant term for African Americans. The city made him take down the first sign.