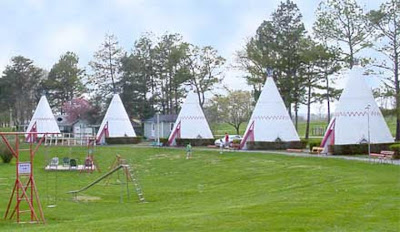 Not to be confused with the Wig Wam Restaurant, Wigwam Village is one of Kentucky's most famed and enduring examples of 20th century mimetic architecture. Each motel room unit is a separate stone teepee, as well as the main office building. Amazingly, even though this tourist trap of a bygone era was originally built in 1937, it still stands today and hasn't been torn down by blasé land developers.

The main teepee is made up of 38 tons of concrete, 13 tons of steel, and stands 52 feet high. Used to have a restaurant back in the day, but sadly that's been long gone for decades. They do still have quite a thriving and wacky gift shop though.

Of the seven original Wigwam Villages, only three remain today. The other two are out West, in Arizona and California.

Does anyone out there own any memorabilia from the Wigwam Village, specifically the Kentucky one? Pictured below is a postcard from the now-vanished Florida one: 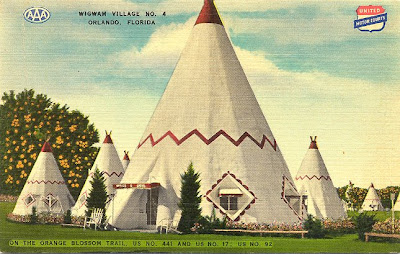 Nice post. A friend of mine wanted us to spend the night there a few years back but it never happened. I do plan on staying the night some time next year though.

I've always enjoyed your site and I'm glad you've moved on to a blog. With this new setup I can (and have) easily subscribe to your RSS feed.

I have postcards from the Cave City Wigwam Village, some matches and a decorated frosted souvenir drinking glass. Love that ol'
Dixie Highway - Sault Ste. Marie to Miami.

A couple years ago on CBS Sunday Morning, Bill Geist did a story about this wigwam village. He may have been travelling the Dixie Highway and offered this as one of the main attractions.

Now that it's October, a sightseeing tour on Dixie Highway might include an overnight stay at wigwam.... and a visit to the infamous Waverly Hills Sanitorium in Louisville...

Is that the same Wigwam Village from the film Lolita?