(Note: the following entry was originally part of my Weird Kentucky book but ended up on the cutting room floor by editorial decision. Apparently my characteristic candor didn't sit well, since Waverly Hills is a sacred cow for many who have turned "ghost-busting" and "spook tours" into a cottage industry. We now present the unexpurgated text for your perusal, dear readers.) 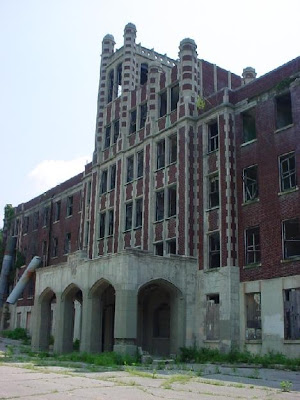 Waverly Hills is a very spooky-looking abandoned tuberculosis hospital in Jefferson County, and if you’re reading this book and interested in its topic at all, chances are good that you’re familiar with the place. But I find the pop phenomenon that many have tried to turn Waverly Hills into very irritating. While working on this book, everyone I mention the project to says, “Oh, you must write about Waverly Hills!” as if that’s their total frame of reference for Kentucky weirdness. Give me Bobby Mackey’s or Whitehall any day of the year.

Don’t get me wrong, Waverly Hills is haunted. But I’ve seen haunteder.

Another “Room 502" anecdote, endlessly passed around like an STD, tells of a nurse who committed suicide by jumping off the roof. Same nurse as Ms. Hillenburg? No one knows. Who was this nurse? No one knows. Does anyone really know anything about it? No.

These stories were in circulation decades before the advent of modern computers, of course, and we’re now able to easily determine from computerized death records that no one by the name of Hillenburg died during Waverly Hills’ existence. We can quickly consult newspaper databases and see that no news stories announced these tragic deaths - not even obituaries.

Of course, the lack of evidence that these suicides - or any other suicides, for that matter - took place here doesn’t stop the throngs of “ghost hunters” who tiptoe around Waverly’s macabre corridors holding cheapo EMF detectors in their outstretched hands like Mr. Spock wielding his tricorder. As if there’s any reason to proceed from an assumption that something as complex as ghosts would be merely electromagnetic in nature (goofy movies like Ghostbusters notwithstanding, of course).

Then there’s the “Death Tunnel.” It’s an inclined ramp with an elaborate motorized conveyor that, some say, was used to transport corpses on gurneys out of the building. Never mind that there would have been more efficient ways of accomplishing this; we’ll not quibble with that now. This “Death Tunnel” is famous for being a haunted “hot spot” for paranormal activity. Trouble is, it’s been established conclusively that this corridor was actually built for the express purpose of loading in supplies, not loading bodies out.

The internet rumor mill, as always, has a way of course-correcting itself: the believer’s party line has now adapted itself to “well, yeah, I guess that’s what it was originally for, but somewhere along the way they also decided it was useful for hauling out the disease-ridden corpses with as well.” Right. Through the same conveyor they use to haul their food in with. Yeah, that makes sense.

A common myth, oft repeated but never sourced, is that over sixty thousand people died at Waverly Hills. Estimates based on reliable information, however, place the number at more like...... a hundred and fifty two. And considering it was a hospital for tuberculosis patients during the early twentieth century TB epidemic, 152 is an amazingly low number.

Another common myth: the building has been abandoned since Waverly Hills Sanatorium closed in 1961. Not so. Immediately after the sanatorium ceased operations, the edifice became a geriatric hospital called Woodhaven, which did business there until 1981. In 1983 a group of developers began to convert the building into a state prison, but the plan fell through. It was only after this that the property went into a cycle of intermittent abandonment and recapitulation. Luxury condos were proposed next, but that plan fell through also. In 1996, a man named Robert Alberhasky announced his intention to erect a Christian center with the eighth wonder of the world, the world’s tallest statue of Jesus Christ on the site! Unfortunately, Alberhasky’s dreams of making the place a mecca for religious Guinness Book of World Records buffs were not to be. According to a 1997 article in the Kentucky Post, the entire project was slated to cost twelve million dollars, but after a year of fundraising, only a meager three thousand bucks had been raised.

Don’t try to enter the premises without permission. I repeat, don’t do it. There once was a time when anyone with a flashlight and some guts could sneak in and putter around, but those days are thankfully gone. I say “thankfully” because there is apparently no greater purpose in life to some than visiting a place of historic importance and spray painting their names on it. You’re free to attend the Halloween tours held there and see it all for yourself then. I highly recommend it.

The public’s obsession with Waverly Hills is largely the result of the undue media attention lavished upon the place. Numerous TV programs and movies have sent camera crews here, with the express purpose of shooting grainy night-vision footage of people standing around looking nervous and saying “did you hear something?” to every little creak the ancient building makes. Every Halloween season, you’ll see hastily tossed-together “documentaries” about the sanatorium somewhere on cable television.

Most recently, a pair of truly foul movies about Waverly has hit the video racks: one is Death Tunnel, a bit of fictional direct-to-DVD piffle (filmed on location at the sanatorium) about a group of truly uninteresting college girls who stay in the building overnight and waste no time in taking off their clothes. Makes the Friday the 13th flicks seem Shakespearean by comparison. The other film is a so-called documentary called Spooked which actually documents very little. Spooked desperately tries to turn a lot of nothing into a little something, by way of blurry photos of shadows and "orbs", with pseudo-ominous music cued.

So why do so many people gravitate to this, of all places, as some sort of ultimate shrine of paranormal gosh-oh-wow-ness? Well, appearance is everything, and it must be said that Waverly looks creepy as hell. It has a gorgeous asymmetrically towering facade with strangely out-of-place arabesque arched entrances. Its crumbling interior is a gorgeously decrepit remnant of another time, and easily spurs one’s imagination to new heights of paranoia when you’re in there at night, expectantly looking to get scared out of your wits. For reasons more psychological than supernatural, Waverly Hills rarely disappoints in this department.

It is haunted to some degree, of course - as would be any site of prolonged human misery - but I repeat: I’ve seen haunteder.
Posted by JSH at 12:18 AM

Cute ghosts in the Moore building according to the pic in the book.

There have been many tales of patient mistreatment and unusual experiments that have filtered down from the hill over the years. Some have been proven false, while others unfortunately have turned out to be true. A scary read, indeed.
---------------------
john edwin
kentucky drug rehab

Great post, I saw Spooked but I felt the historical facts vs. emphasizing the hauntings would have been more interesting. Then, again, perhaps not. Still would love to visit one day.