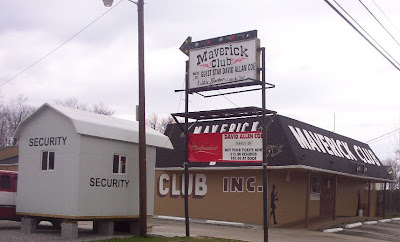 The Maverick Club is a country-and-western nightclub on the outskirts of Richmond, KY, well known to locals as a local nightlife institution.

Many, many years ago, the Maverick was a pretty rough place by all accounts. When Jerry Lee Lewis played here in the late 1960s, he placed a wall of chickenwire between himself and the audience to protect himself from flying beer bottles, just like The Blues Brothers.

We've heard from a former employee that the place is haunted and that is it's not a happy haunting. We've also heard a story that in the 70s, someone was murdered in the club after closing time by someone he knew named Clarence, and that this Clarence left the stabbed man in the walk-in freezer to die as he went about robbing the place. But, as the story has it, the poor unfortunate fellow managed to write his murderer's name in his own blood on the wall inside the freezer. As the story goes, this, along with circumstantial evidence, was enough to convict the murderer. We'd love to get more details and verification on this story if anyone's got the scoop.

The Maverick of today, however, has been under new ownership since 2005 and is a much safer, comfier and cooler place to be, with national acts such as Confederate Railroad, David Allan Coe and T. Graham Brown. Check out their website and drop on in next time you're in Richmond. They're on 1507 East Main Street as you're headed out of town towards the Depot. 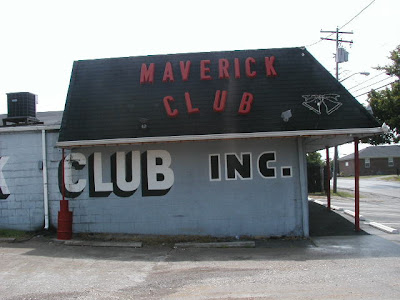 The Maverick was always a place that I was either too smart or not quite brave enough to enter.