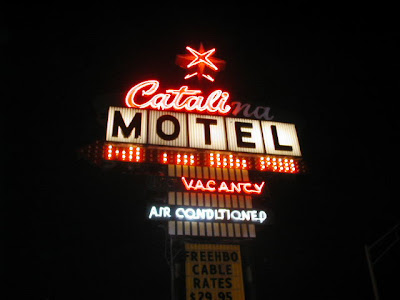 Well, if any motel could talk, you'd have enough bizarre and poignant anecdotes about the human condition than you could stomach... but this motel is something special. The drapes, the carpet, the pool, the pillows, the towels, they all radiate a certain mythic resonance. And I mean that in a good way.

Someday I'll file a report divulging all I have learned in my years of research in this wondrously retro commercial lodging facility (as well as The Glyndon Hotel, among others), but it'll have to come later in life when I release my epic multi-volume tell-all autobiography Transmissions From Agent J. But now just ain't the time and this blog ain't the place.

Like life on the streets, though, the Catalina's life on the sheets isn't all romance. In 1997, Steven Lee Fox was murdered here by Aaron Leaf Rivers, who didn't plead guilty to it until 2007, the case being officially unsolved until then.

As part of a plea agreement, Rivers was transferred to a state prison in Kentucky from the super-maximum Red Onion State Prison in Virginia, where he was already serving a 35-year sentence. According to the Lexington Herald-Leader, Rivers' long criminal record includes six persistent felony offender counts, two robbery charges, assault, burglary and theft by unlawful taking, arson, possession of a fake ID, and mailing fake anthrax to former Governor Paul Patton.

Also according to the Herald-Leader, this drama unfolded in room 208. And the motel is located at 208 West New Circle Road. Numerologists among us, you may now go apoplectic. 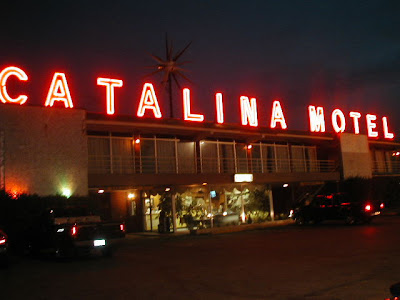 Anyone have old-school postcards and pictures of the Catalina in its 50's heyday? Tip me if you can hip me.
Posted by JSH at 9:58 PM

The Catalina is near Platinum Plus which used to be Solid Platinum and that is supposed to have the best looking strippers / dancers in Lexington. I always wished I would be lucky enough to hook up with one of these gals and then take them over to the Catalina and spend the night. Alas, it hasn't happened yet. Anyway, if Zoey is out there she was worth the $300.00 I spent on her.

The Catalina itself always reminded me of the apartments in the show Three's (sp?) Company.

The Glindon has to have a dirtier past I bet