Kentucky vs. the Internet 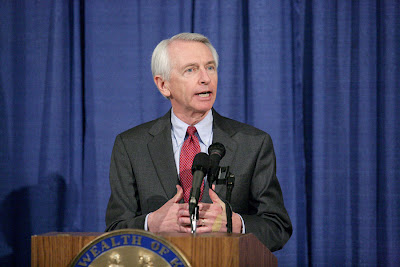 We've reported on some truly weird Kentucky laws in the past, but this new court ruling from Frankfort has to take the proverbial cake. In case you haven't heard, Governor Steve Beshear has proclaimed, as if by royal fiat, that the state of Kentucky has the right to confiscate the domain names to online gambling sites (even ones in other countries) that, in his view, violate Kentucky anti-gambling laws.

Sounds insane? Sounds illegal? Yes, indeed. And yet Beshear's view is also held, coincidentally enough, by a certain Judge Thomas Wingate in Frankfort. Judge Wingate has ordered owners of 141 online gambling domain names to appear at a court hearing on November 17. And then they have to demonstrate that they're blocking traffic from residents in Kentucky - which of course, they're not. If the sites don't appear or don't comply with the ruling, the rights to their domain names will be forfeited to the state.

Experts, however, take an extremely dim view of Beshear and Wingate's confused idea of how the internet works. The professional Poker organization GPSTS called it "bizarre, far-reaching, and unpleasant", and iMega (Interactive Media Entertainment & Gaming Association), which is an organization championing internet growth and innovation, had this to say:

"Judge Wingate has ignored the clear laws of his own state in coming to a decision that essentially green-lights any jurisdiction - in the U.S. and abroad - to ignore our rights and abuse their power to do away with competition or speech or content with which they oppose, regardless of the law. This is a dark day for Internet freedom."

John Pappas of the Poker Players Alliance is equally outraged at Beshear and Wingate's scheme:

"This action not only unduly restricts the freedom of Kentucky residents to play games of skill online, such as poker, but sets a precedent for censorship of the internet by force.

Many of Governor Beshear's arguments - that online poker is illegal, unregulated and without a mechanism to capture tax revenue - are false. Online poker is not illegal under Kentucky law, it is regulated in its home jurisdiction and the Commonwealth of Kentucky chose not to license and regulate poker websites."

Most disturbing of all to me is that the Governor openly admits that a key part of his reason for committing this constitutional travesty is because he would prefer gambler's dollars to be spent at Keeneland, Churchill Downs, and the Kentucky lottery:

"Illegal and unregulated gambling Web sites - many of which operate from other countries - are leeches on our communities and unfairly undermine Kentucky's horse-racing industry. By seizing those Internet names, the state can require the casino operators to block their sites from being accessed in Kentucky. Kentuckians likely spend tens of millions of dollars on illegal internet gambling sites each year - money that might otherwise go to Kentucky's horse tracks, charitable events and the state lottery."

So, uh, that pretty much reduces his argument to a very petty matter of professional jealousy: 'hey, dese other guys' gambling scams are interfering with OUR gambling scams! Dah, we can't have dat! We'd betta rub 'em out, boss!'

Mind you, I don't give a hoot about online gambling myself. It's strictly for suckers and dopes, if you ask me. But I'll still defend to the death these rubes' constitutional rights to go clickity-clack on any internet site they choose, and to blow their money on said sites.

If allowed to get away with this madness, I guarantee you internet erotica will be next, and then the precedent will be laid to quash political dissent sites and anything else that anyone in any Government anywhere wants to banish from the web. So this isn't just about Poker, it's about setting a legal precedent that allows two-bit politicians and judges to really screw up the internet for everyone else in the world.
Posted by JSH at 10:43 AM