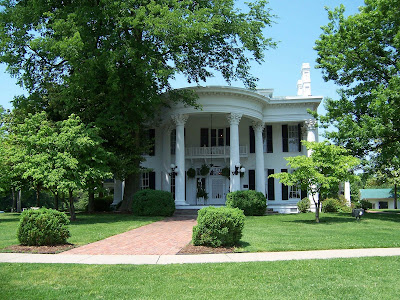 Paducah's spooky old Whitehaven Mansion was built in the 1860s and then abandoned a century later, in 1968. It sat empty in a dilapidated state, heavily vandalized and falling apart, until a major restoration project brought it to its former glory in the 1980s.

Today Whitehaven serves as a tourist welcome center/rest area for I-24. It also houses a sort of mini-museum dedicated to the former Vice-president Alben Barkley. The collection includes his Vice-Presidential desk and chair, walking canes,
shaving mugs, his 1948 inaugural Bible, and more.

Supposedly a female ghost is occasionally sighted on the balcony of the second floor bedroom, and some versions of these anecdotes attribute the ghost to a woman who once lived there and bled to death during an appendectomy.
Posted by JSH at 12:08 AM