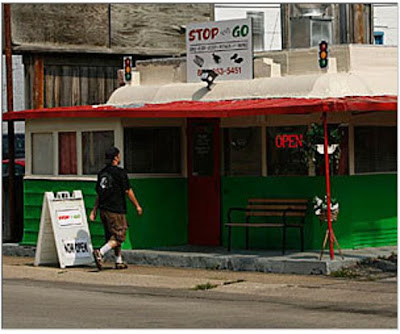 Originally we reported on the old Cain's Diner, which stood on Water Street in Richmond for decades before morphing into The Silver Diner.

Now, the place has changed hands again, and is called Stop And Go Diner. From a recent article in the Lexington Herald-Leader:

Stop and Go owners Russell Cantrell, 50, and Robert Miller, 56, have been cooking longer than the two have been friends.

Cantrell and Miller were a few years apart when they both attended Madison High School, but became friends when they were in the band SPAN (Soul Pleasing All Night), from 1976-1978. Miller played the drums and Cantrell was the sound technician for the group that was formerly known as the Techniques.

It was during Miller's sophomore year in high school that he had one of his first experiences with the restaurant he would later co-own. Miller descended the hill from his school down to the restaurant on Water Street, then known as Cain's Diner.

According to Miller, the owner, James Cain, still kept a sign on the wall that seemed to yell at blacks: "We have the right to refuse patrons." Miller walked in and sat down at the counter. He says Cain called Miller and his friends the N-word and promptly told him to leave.

Miller's mother, Mary B. Turner, 83, remembers how disappointed her son was that day. "I guess he was kind of shocked and surprised that he couldn't come and eat here," she said.

Stories like Miller's left a sour impression for many blacks in Richmond for many years.

I haven't sampled the food at Stop And Go yet, but from all reports, it's fantastic. Not just good, but great, and blows all previous incarnations of the diner out of the water. I'll be dropping in to Stop And Go soon and will give a full report.
Posted by JSH at 10:20 AM