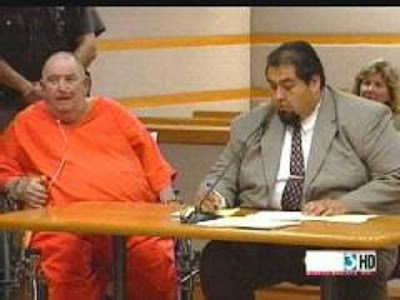 "Men Behaving Badly" seems to be an unfortunate recurring theme in Kentucky news lately... in just the last month and a half, I've had to report on a psycho politician, a pastor turned pedo, a pedo turned pastor, a soldier turned pedo and psycho, a coach who has your kids baptized without permission, and a coach who cheated on his wife by having sex in a restaurant.

On behalf on my gender, I urge you, dear reader, not to hold it against menfolk in general. Some of us are perfectly gentlemanly metrosexuals who listen to Belle & Sebastian and run their juicer daily. And as your humble editor and blogger, I apologize for all this depressing "Guys Gone Bad" stuff as of late, but really, it's all just too seethingly nutsy not to cover. I promise to talk more about ducks and stuff in the near future.

And with that, I'm afraid I must now delve into yet another story about yet another scumbag: our old fiend Edward Wayne Edwards from Louisville is in the news again.

Edwards is currently facing trial for the murders of teenage newlyweds Tim Hack and Kelly Drew, and probably soon to face trial for other killings as well, like that of Dannie Boy Edwards. He has currently not entered a plea, but it's expected he'll plead not guilty, since he's now claiming he didn't kill anyone. According to the Associated Press:

Asked how his DNA got on Drew's pants, Edwards said he drank with Hack and Drew and had consensual sex with her in a field outside the reception hall, prosecutors said. The complaint does not specify where the three allegedly drank.

Edwards told detectives he saw Hack fight with two men, and the men stomped Hack to death as Drew screamed. He then saw three men stomp Drew to death as she lay on her back. He said he didn't intervene or tell police because he didn't want to get involved, according to the complaint.

So, Edwards would have us believe that a 19-year old bride had consensual sex with this shambling heap of a man in a field on the evening of her wedding reception? And that her new husband was apparently cool with that? And that they all sat around drinking together when the young couple should logically be headed off on their honeymoon? And then a team of unknown assailants suddenly jumped out of the bushes and killed the two teens but not Edwards? And that he didn't call the cops because he "didn't want to get involved"?

Clearly, this man is not running on all his cylinders.

Crazy Ed's story not only doesn't jibe with common sense, it doesn't fit the forensics. If he, as he now claims, watched these mystery men stomp Kelly Drew to death, why did the autopsy clearly indicate her wrists and ankles had been tied up? Why were her clothes cut into pieces and strewn around a road five miles away? Why was she strangled, and why was the groom stabbed, if Edwards says he saw them "stomped to death"?
Posted by JSH at 11:32 AM