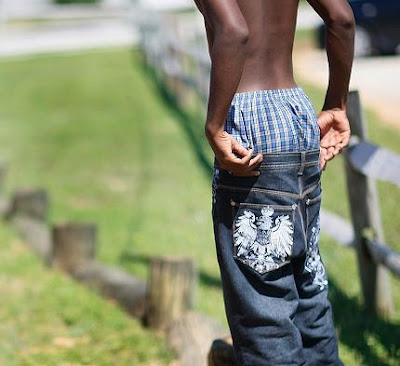 And then there's the very funny joke about Louisville's so-called "saggy pants resolution", in which the city Government attempts to dictate fashion by coming out against the popular hip-hop style of having saggy pants. Except it isn't a joke.

Since it's acceptable to go out wearing nothing but shorts, how can it be unacceptable to go out in saggy jeans that reveal part of those shorts peeking from underneath? If you think that sounds insane, welcome to the world of Louisville Councilwoman Judith Green.

According to LEO Weekly:

Despite having sponsored two controversial resolutions, Councilwoman Judy Green, D-1, was missing in action for both of her committee meetings last week. She was still on vacation when Councilwoman Cheri Bryant-Hamilton, D-5, made an amendment to broaden Green’s resolution to rename all of 34th Street in honor of the Rev. Louis Coleman.

And no one knew where Green was at the start of last week’s community affairs meeting, which was scheduled to debate her saggy pants resolution (for which no other council members even bothered to show up). Councilman Bob Henderson, D-14, who chairs the committee, decided to forward the measure to the next full council meeting.

Even more bizarrely, this resolution - which should have been laughed out of the room the second Green had the nerve to even bring it up - has passed the Metro Council Committee. Reportedly, several city lawmakers have privately stated that they consider Green's resolution a total waste of time, yet none of them have had the integrity to come out and publicly say so on the record.

Call me old-fashioned, but I like the U.S. Constitution the way it is, and I believe Americans have the right to dress as ridiculously as they like, and to look just as slovenly and stupid as they care to. What's next - resolutions against Goth fashion? Punk rock fashion? Rasta fashion? Crossdressing? Ugly sweatpants? How about tacky scarves?

“I think we have got way more important stuff to be dealing with than whether or not a kid has got his pants down on his butt,” says Eddie Woods, executive director of the L.I.F.E. Institute, which works with at-risk youth in west Louisville and also closely with Green’s office. “I’m dealing with murder and mayhem everyday. Sagging is the last thing I’m thinking about.”

Green's scheme is not an ordinance or a ban, of course. It's merely a toothless and legally nonbinding resolution - in other words, it amounts to little more than an unenforceable stern suggestion. That Green would choose to waste the time and resources of the city on something so purposeless is appalling, although it's a given that politicians (especially small-time ones) love to stir up issues like this just to "look busy".

In other cities, these sort of resolutions have been used as trial balloons for cooking up outright laws against saggy pants. This has been a national trend for awhile now (Green is behind the curve in her meddling) but time and time again, these things get struck down as being - duh - unconstitutional.

If you'd like to call Green and tell her what you think of politicians telling American citizens how to dress, her phone number is 502.574.1101 and her e-mail contact form is here.
Posted by JSH at 12:01 AM