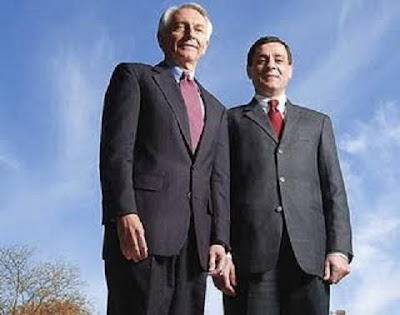 A recording of Kentucky Lt. Gov. Daniel Mongiardo has surfaced on YouTube, in which he is allegedly heard using expletives and complaining about Gov. Steve Beshear's weak support for Mongiardo's upcoming race for the U.S. Senate. And predictably, there's a throng of exaggerated outrage in the giant kindergarden sandbox that is the internet.

It was a shock to the generally naive public when Richard Nixon's "Watergate tapes" were released and it was realized that, when among friends in candid conversation, the President used curse words. Heavens to Betsy! It wasn't quite such a big deal a few years later, when Jimmy Carter was heard to say, regarding Ted Kennedy, "I don't have to kiss his ass."

Every President since has been heard to curse at some point or other. Yet some people are just having a conniption-fit now that Mongiardo was heard "dropping the F-bomb".

Get over it. This only makes me respect Mongiardo more, not less.

Others are more concerned about the more important part, which is that Mongiardo probably shouldn't be heard criticizing Beshear. Everything I know about Beshear so far tells me I don't like the man (and hey, I even voted for the guy!) and I don't doubt one bit the alleged assertion that he's screwing Mongiardo over politically. Maybe this tape will be a wakeup call to Beshear to straighten up and start showing more support for his fellow Democrats. Beshear's going to need all the help he can get to rally Democrats behind him for his own next election, and it doesn't do to be pissing off Mongiardo Democrats (He's already pissed me off long ago).

Jasmine Farrier, a Political Science professor at the University of Louisville, summed up the hypocrisy to WAVE-TV: "In the long term, voters have a very difficult task for politicians which is: we want them to be candid. We don't like phonies, but apparently we are also very suspicious when they speak their minds."

The whole question may be moot, however - the tape is apparently a fake, spliced together from multiple recordings. Mongiardo has released a statement to that effect, and Beshear himself has dismissed the tape as "political prankstership".

(photo above: Beshear and Mongiardo, looking like something out of Madame Tussaud's.)
Posted by JSH at 9:28 AM