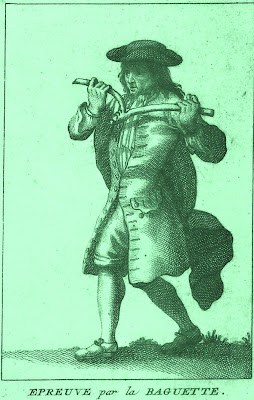 The art of dowsing, also known colloquially as "water-witching" or "doodlebugging", is an ancient tradition brought to America by its early European settlers. And it's alive and well in Kentucky.

The Tri-state Dowsers are an organization uniting dowsing-rod experimenters across Indiana, Illinois, and Kentucky. Member Duane Walter was interviewed in the Evansville Courier Press awhile back, and said he's actually rarely been called upon to use his divining gift to find water. Most times, he's asked to help locate unmarked graves.

"I don't encounter mistrust very much, but it happened this one time in Owensboro (Ky.). This church was planning to move their cemetery, and they wanted to make sure all the bodies were accounted for. There were a few people who stood at the window and watched. Didn't want to come outside. Called me a warlock. Didn't scare me off, though. I did the job I was asked to do."

While Walter has a toolbox full of dowsing tools and pendulums, he's just as likely to use a simple "L-rod" that can be fashioned from a coat hanger.

He and his wife, Phyllis, live in a log cabin built in the late 1970s. Their 80-acre farm has been in the family for five generations.

"At first I was skeptical," Phyllis Walter admits, smiling, "but when he went to two cemeteries, and I watched him find some long-forgotten graves, I became a believer." 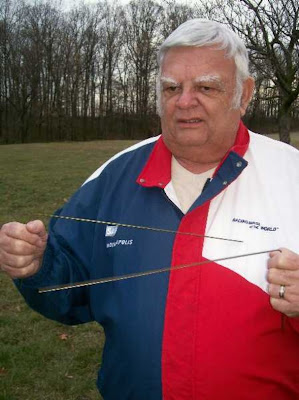 Dowsing is often attributed not to any special gift of the dowser, but to Ley Lines. This phenomena may indeed aid a dowser at certain points, but I don't think that's the whole of the story. Dowsing seems to work just about anywhere, anytime, not just near alleged Ley Lines or power-points on the Earth's grid. And then there's also Telluric Currents, Morphic Fields, Bruce Cathie's World Grid, Songlines, and the "Dragon Currents" of Feng Shui.

According to a 1978 study by Z.V. Harvalik, dowsers respond to a 60hz electromagnetic field but this response supposedly does not occur if the kidney area or brain are shielded. I would posit that it isn't the kidneys that are involved in the abdomen, but the gut brain, the literal second brain that humans have which was only discovered a few years ago and was unknown in 1978.

Far less credible to me are those are claim to use dowsing rods as ghost detectors. Someone calling themselves Whistling Owl tells a story of entering the haunted Talbott Tavern in Bardstown (see page 194 in your copy of Weird Kentucky) with a divining rod and asking out loud, "are there any ghosts present in this room?". Supposedly the divining rod swung around and pointed behind the dowser, who also claims that when they got home and listened back to a tape recorder left on in the room, a ghostly voice was clearly heard whispering "behind you!" 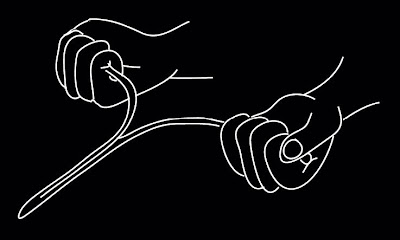 Famous dowsers in recent history include: