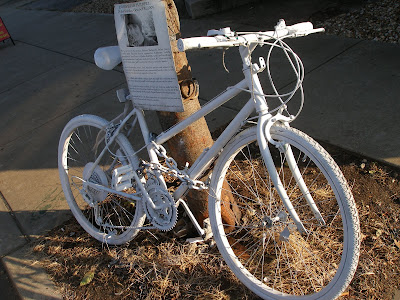 Ghost Bikes are a type of roadside death memorial commemorating the death of a bicyclist, at or near the site where they died or where struck by a motorist. A bicycle is spray-painted white and secured to a sign, pole, or tree, accompanied by a small plaque or notice.

Pictured here is a Ghost Bike tribute to Jennifer Futrell, who was struck and killed by a van while riding her bike without a helmet on Bardstown Road in Louisville. 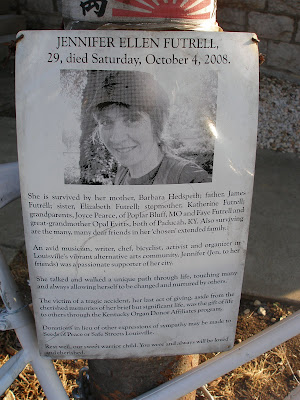 The world as we know it is filled with what I call "Unsolvable Problems", and the neverending Bikes vs. Cars dilemma is one of the biggest and most unsolvable. When I'm in my car, I hate bicyclists, and when I'm on my bike, I despise motorists. There's just no way around the dichotomy. It is simply the way of things, no matter how awesome bicycles are.

Let's face it, for all the talk of "sharing the road", something flimsy and unprotected that is only going a few MPH just cannot, cannot, cannot coexist with sturdy metal things that are going 30-60 MPH or faster. It cannot happen. It cannot work. No matter how much we all want it to. It's just asking for more tragic accidents to happen.

It also doesn't help that many bike lanes - a hard-fought gesture though they were - are ridiculously, uselessly small and often filled with the usual urban debris that tends to gravitate towards the curb. When I'm on a bike, I often curse the narrow East-End slivers of pavement that I'm expected to stay inside, and I go outside the lines whenever necessary. But later that same day, when I'm driving a car, I curse other bicyclists who do the exact same thing and nearly get us both killed.

There's just no getting around this admittedly hypocritical conflict. Even if we added a third, bicycle-only, full-sized lane to every road in existence (which obviously will never happen), there'd be no realistic way to prevent cars from driving in it. As with current smaller bike lanes, it would probably just encourage idiots to park their cars in them, and idiots are unfortunately here to stay.

So what is the answer? There isn't one. That's why it's called an Unsolvable Problem. Cars and bikes will eternally clash - literally - as long as both are expected to occupy the same space. However, some cities have experimented with instituting French Quarter-like "car-free zones" where only bicycles, horses, and pedestrians are allowed. I'd love to see this idea take off in Kentucky cities. (For starters, let's permanently get rid of automobile thru-traffic at Fourth Street Live.)

Myself, next Spring I plan on toolin' around the town in this Pedal Surrey which I plan to modify to include an onboard mp3 sound system, GPS, and handlebar-mounted Blackberry. Plus a few James Bond kinda devices which we mustn't speak of here.
Posted by JSH at 12:05 AM

Title reminded me of that bike that Todd Dockery and I heard that one night out in the subdivision where he used to live in Berea / Paint Lick.

nice post. i admit being guilty of the same thing. when I'm on my bike, cars are the enemy, but then my perspective sure does change when I'm driving a car. I hope the problem isn't *hopelessly* unsolvable though.

loved the surrey bike! wonder how fast they can go? :p