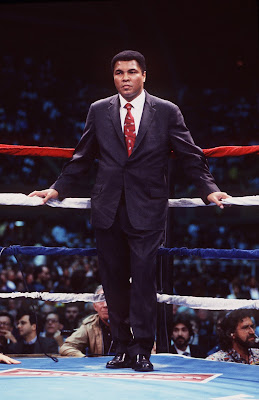 It's come to light that the heavyweight boxing champion of the galaxy, Muhammad Ali, is actually of Irish ancestry, just like your humble author here. Funny old thing, life, isn't it?

Ali is currently visiting Ireland, catching up on things in the old old neighborhood.

Researchers at the County Clare Heritage Centre in the south west of Ireland have unearthed documentation to show one of Ali's great grandfathers came from the county town of Ennis.

It seems Abe Grady, born around 160 years ago in County Clare, emigrated to the United States in the 1860s.

He settled in Kentucky and later married an African-American woman. Their son also married an African-American and one of the daughters of that union was Ali's mother, named Odessa Lee Grady. She married Cassius Clay, senior, and they settled in Louisville, where their son, later to become known as the Louisville Lip, was initially given his father's name on his birth in 1942.

He later changed his name to Muhammad Ali when he converted to the Nation of Islam after winning the world title in 1964.

Will Smith's masterful portrayal of the young Ali in the classic Michael Mann film Ali introduced a whole new generation of fans to his charismatic greatness in 2001. If you live under a rock in Brisbane and haven't seen it, check it out. Forget what you think you know.

Ever since Ali moved to my end of town, I've been waiting for an invite to come over and visit, but it must keep getting lost in the mail. Maybe I'll just show up at his doorstep sometime bearing a housewarming gift of some of my best 21-year-old Bushmills.
Posted by JSH at 12:12 AM