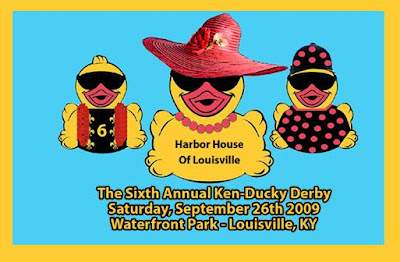 I'm not sure why there are two different "Ken-Ducky Derby" events each year, but what the heck, it doubles your ducky fun. Barbourville had theirs back in June, and Louisville will have its 6th Annual Ken-Ducky Derby at Waterfront Park on Saturday, September 26th, 2009.

Basically, here's how it works: you "adopt" a duck by going to one of the race's sponsor outlets and getting your adoption papers for it. It's $5 for a single duck, $25 for a "Quack Pack" of six, $50 for a "Big Quack Pack" of fourteen, and $100 will get you an entire flock of thirty ducks. Adoption sponsor locations include Kroger, Republic Bank, Krispy Kreme, Starbucks, Coach's Fitness, Bearno's Pizza, Pat's Steakhouse and Joe's Crab Shack. Then they turn at least 20,000 numbered plastic duckies into the river and you hope your quacker's number comes up the winner at the finish line.

According to their press release:

"The real winners of The Ken-Ducky Derby are the participants of Harbor House of Louisville, a not-for-profit certified development and training facility for adults with developmental disabilities. In addition to raising over $100,000 each year for Harbor House programs, the Ken-Ducky Derby helps increase the community's awareness of the agency and the critical need for the services that it provides." 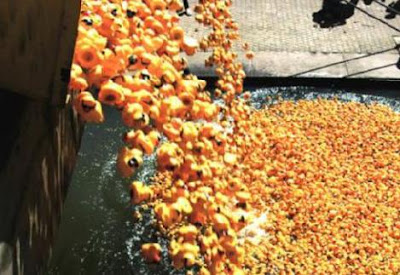 As an anti-plastics activist who is especially concerned about plastics getting into our world's waterways, the idea of turning loose tens of thousands of plastic ducks into the river makes me cringe. But this year, I will experimentally adopt one of these ersatz mallards and will be attendance at this duck race to see exactly what happens to the rest of the ducks, and how they get them back out of the river once the fun's done. I would hate to see all this duck-dunking contribute to the already catastrophic armada of lost plastic ducks polluting the world's oceans, thanks to the Chinese Friendly Floatees company. 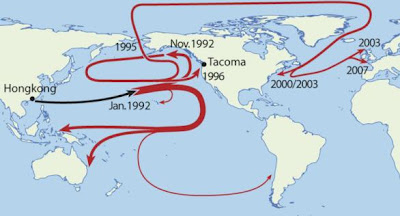 (I wouldn't object to winning the Ducky Derby's grand prize, a 2009 Honda Civic from Sam Swope, though.)
Posted by JSH at 12:00 AM

My kids have that Eric Carle book about the Ten Rubber Ducks- It's great!